Kevin Belingon has been competing in ONE Championship for more than eight years. He has had 18 fights in the promotion and won eleven of them.

It’s fair to say the former bantamweight champion knows a thing or two about what makes a great fight. At ONE: ‘Inside the Matrix’ Part III Belingon takes on UFC veteran John Lineker.

Lineker is a fan-favourite. During his time with the UFC, he earned bonuses for either ‘Fight of the Night’ or ‘Performance of the Night’ on four occasions.

Looking ahead to the bout, which will be broadcast on delay this Friday, Belingon anticipates quite a spectacle,

“Ever since John Lineker signed with ONE, all I’ve been hearing and reading from the fans is Belingon versus Lineker,” he said.

It has all the makings of a memorable fight and the 33 year old confidently predicts that will be the case,

“Now it’s finally here, and I’m excited for it. Expect fireworks. Expect it to be a good one.” 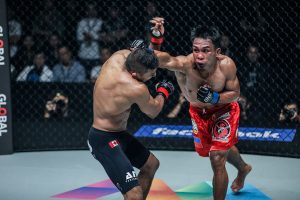 Only three of Belingon’s 20 wins have come via submission and the last was more than a decade ago. It is clear that the Filipino prefers to dominate his opponents with his striking over his grappling, and he’s relishing the chance to test his power against Lineker,

“One look, and it’s easy to see that we’re both hard hitters, and that’s the reason why this matchup is so exciting,” Belingon said.

“It will be very interesting given our styles and I plan to keep it that way,” he adds.

“At the end of the day, I hope to get my hands raised.” Belingon hasn’t competed for over a year due to the pandemic. His last bout was a submission loss to long-time rival Bibiano Fernandes at ONE Championship: ‘Century’ Part II.

Despite the lay-off, he believes that he will be the sharper of the two athletes when he returns to the ONE circle,

“I believe I’m quicker than him,” Belingon says.

“I think I’m more agile and have better endurance. Those are just some of the advantages that I believe I have in this match.” Belingon will be making his return alongside team mates Lito Adiwang and Geje Eustaquio who both compete on the card. He feels the work that they have put in at Team Lakay during their hiatus will stand them in good stead in Singapore,

“I thought we were able to adjust well and adapt to the changes that the pandemic brought. That’s why I believe I’m in good shape,” he explained.

“We’ve been preparing at home, making the most out of the limitations, just to make sure we were in good condition once we started our camp for this.” 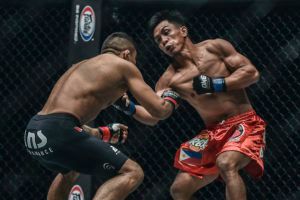 Lineker comes into this bout on the back of a unanimous decision victory over Muin Gafurov on his ONE debut a year ago. Despite not being willing to make an outright prediction for the fight, Belingon will be seeking a stoppage against the Brazilian.

“I don’t like predicting things because, in a fight, we can never really tell,” the Filipino said.

However if he senses an opportunity to finish the fight Belingon is determined to seize it,

“But make no mistake about it I’ll go for the knockout if the opportunity presents itself.”