When Yushin Okami’s most recent contract with the UFC came to an end, he immediately had an idea about where he wanted to fight next.

The 37-year old Japanese veteran had spent most of his career competing in American based promotions like the UFC and World Series of Fighting in recent years.

After reaching free agency, Okami had a specific place in mind where he had never been tested before and it seemed to be the right place for him to call home.

“After I was done with UFC contract, I requested my manager Shu Hirata to negotiate with ONE Championship,” Okami said when speaking to AsianMMA.com in an exclusive interview.

“I felt I’ve done everything I can in terms of fighting in the North America, and also, as I get older its getting difficult to go through the weight cut. However, under the ONE weigh-in rules, fighters are not allowed to dehydrate, which is good for me, and also, in Japan, the fans would have more access to watch ONE Championship than UFC, therefore, I have decided to fight for ONE Championship.” 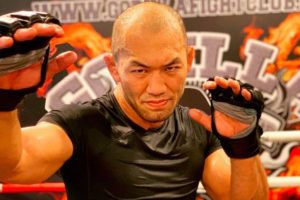 While he has fought as a light heavyweight, middleweight and welterweight at different points in his career, Okami felt like the divisions in ONE Championship would be best suited for him.

He makes his debut at welterweight when he faces Kiamrian Abbasov at ONE: ‘For Honor’ this Friday in Jakarta and that is expected to be his home at least until he has an opportunity to become champion.

“First, I am going to fight at welterweight,” Okami explained.

“In ONE Championship, 83.9 kg is the limit for the welterweight so I can make that weight by just eating right foods. I don’t have to dehydrate myself so I can keep a good condition without any stress, and this means, I can fight under the best condition. Those are the reasons why I have decided to fight at welterweight.”

“I would like to get that welterweight title first, then I am thinking about going up to middleweight to go for the second title to become a champion at two different weight classes.” First things first, Okami has to get through the welterweight division where Swedish knockout artist Zebaztian Kadestam is currently champion.

Okami has faced a laundry list of legends during his career so there’s little doubt he’s ready for the competition in ONE Championship and from the sound of things, he’s happy to face whomever they throw at him.

“I think lighter weight classes at ONE Championship has a pretty good depth. In terms of heavier weight classes my impression is those divisions are stacked with bunch of unique fighters,” Okami said.

“In terms of the welterweight division, I am not interested in fighters I am only interested in taking the belt. And this means, I am willing to fight anyone.” With a career that stretches back nearly 17 years with more than 40 professional fights on his resume, Okami is still going strong while many fighters with the same level of experience have already retired.

Signing with ONE Championship has once again reinvigorated the Japanese superstar and he promises there is still a lot of fight left in him.

“In order to maintain motivation, I think it’s very important to face myself. Don’t measure everything by just a result of the fight, keep desire to get better, and keep evolving. By doing this every day, I can maintain my motivations,” Okami said.

“I live in the world of where people will be evaluated only based on the result of win or lose but if you just focus on the result then it’s going to be very difficult to maintain motivations.” Okami has been around for a long time but believes he still has plenty more to offer,

“I think, what I have learned and felt from losing fights is nothing but a treasure. From losing a fight, I can discover what I need to work on, and that is going to become a beachhead to become stronger. By maintaining a desire to get stronger, I can evolve more. I know this from my experience so I never lose motivation to fight. I know I can evolve more and more and will be a stronger fighter. I’ve (been) fighting in North America for most of my career but at my age I am honored and very pleased to be able to fight in the new stage. In ONE Championship I will promise that I am going to show the strongest Yushin Okami.”

If all goes well this weekend in his debut, Okami already has his sights set on an appearance at ONE: ‘Century’ in Tokyo where he hopes to challenge Kadestam for the title.

“I definitely want to fight in October at the Japan event,” Okami said.

“I want to do a welterweight title fight there and I will definitely become a champion in my home country.”