TFC 19 was a night to remember for the humble South Korean promotion with action-packed clashes and a comeback submission.

The main event between Kim Jae-Woong and Kim Myung-Gu went down as expected with the former using his precision punches and deceptive power to easily end the fight early in the second round.

Myung-Gu spent the first round chasing Jae-Woong around the cage trying to clinch and work his wrestling to no avail. Jae-Woong defended well along the fence and landed low kicks as well as the right hand continuously.

With seconds left, Myung-Gu was hit with a solid punch that rocked him. He desperately lunged for a takedown to buy him time until the bell rang to end the round.

Round two started off with Myung-Gu’s left eye completely shut from all the shots he took in the first. After a failed takedown attempt by his opponent, Jae-Woong sprinted forward and smashed a straight right hand between the guard.

Myung-Gu (10-4) fell back and a couple of devastating left hands was all it took for the referee to step in and stop the contest. That makes it two straight impressive performances in a row for Kim Jae-Woong (8-3) after losing the featherweight title late last year. 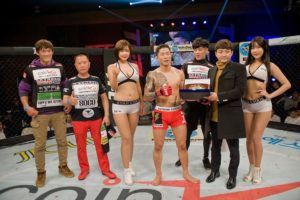 In his post-fight interview, the brash Extreme Combat member stated that he has TFC bantamweight champion Hwang Young-Jin in his sights and it is just a matter of time until he gets his chance at recapturing a championship belt.

Just like the headliner, the co-main event was also a complete domination.

Twenty months have passed since their first encounter where Seo Ye-Dam pounded out Seo Ji-Yeon at TFC 14 and nothing changed except that this matchup ended much faster than the previous one.

The ladies rushed out and met in the center of the cage. Ye-Dam had a simple game plan from the beginning and implemented it to perfection. 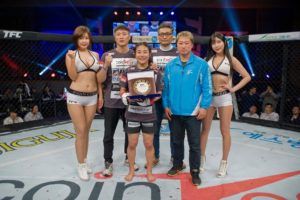 The Paraestra representative initiated the clinch and pressed Ji-Yeon leading to two takedowns. After a stalemate against the fence, the referee separated them and they restarted in the middle.

They immediately locked up and Ye-Dam dragged the fight to the mat right away gaining top position. She easily slid into mount and then transitioned to the back. While Ye-Dam was flattening her opponent out, she slammed punches and slipped a hand under the neck to get the submission late in the first frame.

Ji-Yeon’s (6-3) chances at revenge didn’t even see the day of light and Ye-Dam (3-2) proved with the rear naekd choke win that her strength is unmatched by her younger foe.

In the fight of the night, Will ‘The Kill’ Chope came back after taking a tremendous amount of punishment for the better part of two rounds to snatch up a rear naked choke in the last period while likely losing on the scorecards.

For the first nine minutes, Chope stood in the pocket and took solid punches from Hwang. The American got dropped a few times and was bleeding from multiple areas of his face yet kept marching forward.

In the final sequence early in the third, Hwang exposed his back and Chope hopped on instantly. While they collapsed to the canvas, the 28-year-old already had his arm around the neck and began to strangle his opponent. The tap came shortly after and Chope (36-14) got a victory in his 50th professional fight. 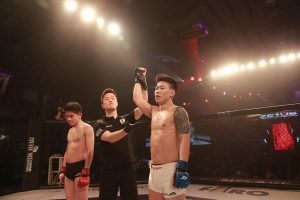 Tofiq Musaev was scheduled to fight at Rizin 22, expects to return at Midsummer Martial Arts Festival

Kevin Belingon working on his ground game, wants a fight with John Lineker