After capturing the vacant Road FC bantamweight championship this past February, Kim Min Woo wants to put on a show when he defends his belt for the first time this Saturday.

He will get his first chance on Saturday when he returns to action at the Jinnam Gymnasium in Yeosu, South Korea.

Although he respects his upcoming opponent’s skills, Kim does not believe that Hwan is capable of claiming his crown,

“Jang Ik Hwan is very strong and has really good punches. He has good leg kicks. I don’t think he can beat me though. I think I am much quicker than him and the more versatile athlete,” he explained through his translator. 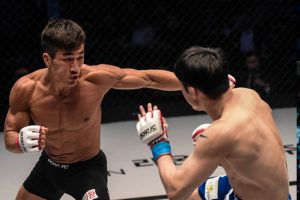 However while Kim sounds confident he is not complacent,

“Nonetheless, I’m not planning to show off, nor am I overconfident. I’ve trained very hard for this title defense. I’ll need to watch for and be careful of everything that he does in the cage on fight night because one mistake can make a big difference,” Kim added.

Jang has built himself up through the ranks of the 135lbs weight class and earned his title shot by accumulating an 8-1 record. His only hiccup in his run with the organization was against Heili Alateng.

Following first-round technical knockout loss to Alateng, Jang redeemed himself with back to back decision wins over Jang Dae Young and Jung Sang Jin.

Jang has cemented his status as the #1 contender in the bantamweight division and Kim embraces the challenge. He says his opponent has truly earned his shot at the belt,

“The belt is not going anywhere. I know he is good. He earned the right to fight for the belt, but I will do my best to remain as the champion. I hope it stays that way for a very long time,” he said. 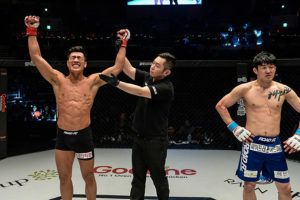 Kim, who ascended to the bantamweight throne by submitting Moon Je Hoon in the first round at Road FC 52, is confident that he has the necessary tools to extinguish Jang’s signature firepower.

“Whether he comes out strong, or whether he comes out slow, I will adjust to every situation, and make sure I get the upper hand. I know my capabilities. Anything he brings, I will be ready for. There will be no excuses from my end. It is either him finishing me, or me finishing him,” he stated.

Fueled by the desire to become one of the most successful South Korean athletes in mixed martial arts, Kim is determined to raise his stock further by accomplishing a decisive victory over Jang,

“I am looking forward to defending my legacy and giving the fans a good fight. One thing is for sure, this is the best you’ll ever see me inside the cage. I want to show the whole nation that I am worthy to be called champion. I will be victorious.”