Kiril Gorobets has the biggest fight of his life coming up at ONE: ‘Lights Out’. But the Ukrainian’s thoughts are with his countrymen who are engaged in a war with the invading Russian army.

Ahead of his fight with Martin Nguyen the Ukrainian took to Instagram to praise the men and women protecting his homeland.

His message translates as:

‘I will do everything to raise the flag of Ukraine after the victory and show the world who the Ukrainians are. We will win on all fronts. This is the least I can do for you now. Glory to Ukraine! Glory to the Heroes!’

Gorobets is making his ONE Championship debut. He faces a tough test against former featherweight and lightweight champion Nguyen.

But the Ukrainian knows his struggle is nothing compared to the battle his country faces trying to repel the Russian invaders. Should he prevail against Nguyen we suspect Gorobets will have plenty more to say about that! 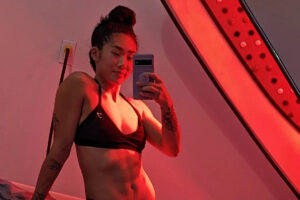 Angela Lee is in recovery!