Martin Nguyen knows he has one punch knockout power in his right hand. He has proved it over and over again finishing some of the biggest names on the ONE Championship roster.

But by playing to his obvious strengths Nguyen has displayed a weakness. When he overcommits looking for the finish he leaves gaps that both Kim Jae Woong and Thanh Le were able to ruthlessly exploit in 2021.

Nguyen is coming off back to back defeats for the first time in his career but sees it as a valuable learning experience, 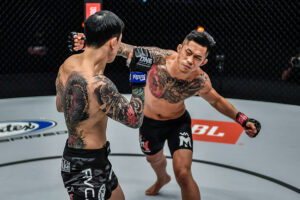 Nguyen believes he was guilty of throwing caution to the wind in pursuit of one of his trademark finishes,

“Don’t get me wrong, I have no excuses. I take the loss as a man, but up until I got caught with that one punch, I was winning the fight. It was just a mind lapse of wanting to go for that shot at that very moment. I could have fought smarter and mixed it up a bit more.”

Nguyen feels he has been a victim of his own success in that so many opponents have been finished in similar fashion that fighters know what is coming and can prepare for it,

“There were options, but I let my ego get ahead of me once again. I landed a few jabs and I felt amazing, and I was like, ‘you know what? I can do this’ and obviously, my opponent had studied me for that long. He just read it, had perfect timing, and then caught me.”

Nguyen knows better than most what it feels like to finish an opponent with a single shot. He was on the wrong side of that equation last time out but does not begrudge his Korea opponent the moment,

“All it takes in this unforgiving sport is that one punch, and I’ve been there. I’ve been on his side of the punches, they do feel amazing at the time as well. So hats off to him, credit to him. I take the loss as a man. I go back, I get back to work, and get better.”

He hopes to be back in action in the first quarter of the new year,

“Around March, after my birthday. I’m not in too much of a rush to get back in, to prove myself. At the moment, I’m just trying to get better and learn new things so I can come back with a whole set of new tools and not just come back just for the sake of coming back.” 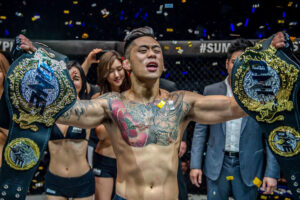 Nguyen has headlined some of ONE Championship’s biggest cards and is privileged to be in a position of financial security. He doesn’t need to hurry back in order to secure his next pay day and is just focused on getting better,

“I’m not in any financial burden where I need to get back at this very moment. I just need to get better, rewrite my whole content of books in fighting styles in my head, and practice them, and keep practicing and fix the flaws.”

Garry Tonon is set to challenge Thanh Le for the featherweight title. Nguyen will be watching with interest but believe the champion will defend the belt,

“If I had to pick, I’d say the champ, Thanh, just based purely based on my experience,” he said.

But Nguyen is not ready to become a pundit. He feels he is still a force to be reckoned with in the featherweight division and wants to give the champion and the challenger something to think about next time he fights,

“But in all honesty, I don’t really care. The whole division’s there, everyone will be on notice when I’m back in the winning column.” 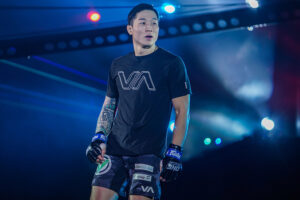