Kirill Grishenko did not expect to be challenging for the heavyweight title so soon. But Arjan Bhullar is not willing to defend his strap at the moment so an interim title will be on the line when he faces Anatoly Malykhin at ONE: ‘Bad Blood’ next week.

Malykhin will be the favourite but that is not an issue for the man who will be facing him,

“I’ve been called an underdog in each of my fights, but it’s cool for me. I like to prove the opposite, not just to the audience, but to myself,” Grishenko said. 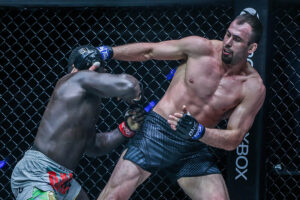 He earned the opportunity by winning his first five fights and while the timing was unexpected Grishenko plans to make the most of his good fortune,

“Well, of course, it was unexpected to get this opportunity right away. But I was very happy because I work for this goal. I train hard for this. I will do my best to achieve my goal,” he said.

The 30 year old has a lot of respect for his opponent who is also undefeated but has twice as many fights,

“He’s a very high-class opponent. I watched all his fights, and he’ll be a big challenge. He’s a multi-faceted fighter. He does a lot of things well. He’s from freestyle wrestling. That’s in his genes. Recently, he’s improved his striking significantly, but I’m ready for everything.” 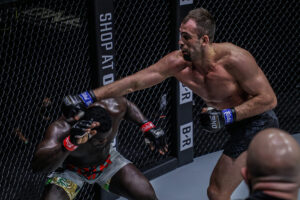 He has already started thinking about how winning the ONE Championship heavyweight title might change his life,

“It’ll be a great leap in my MMA career and a boost for my further development. I don’t plan to stop, but I’ll continue showing flashy, spectacular fights to make my fans and loved ones happy, and also to prove I deserve to be one of the best fighters in the world.”

This will be his first title fight and there is the possibility the bout could go the full five rounds. Grishenko says he is ready to fight for 25 minutes if necessary,

“I’ve trained for him seriously and will be ready for all five rounds with him. I don’t have any doubts, I believe in myself and I’ll go to the end.” 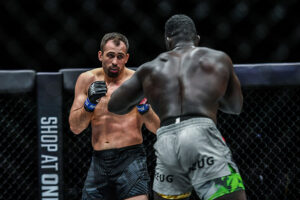 Grishenko knows he is not the biggest name in the heavyweight division and that his path to this title shot has been somewhat fortuitous. But he is adamant that he has earned it and says years of hard work are finally coming to fruition,

“If I’m given a chance, I’ll try to take it. It doesn’t matter what people say. I know how hard I’ve worked and what I’ve gone through. I fully deserve this chance.”