Shooto ace Kiyotaka Shimizu is ready to provide 20-year-old unbeaten prospect Tatsuro Taira with a fighting education in their main event clash at Shooto 1123 on Monday.

Former flyweight King of Pancrase Shimizu represents a giant leap in terms of calibre of opposition, and a significant shift to the top of the bill, for the youngster Taira who has won five of his six pro fights inside the distance.

Shimizu is a teak-tough veteran who has heavy hands, with 14 of his 25 MMA wins coming by way of stoppage. The Ishibashi, Tochigi native has only been stopped twice in his 43 fights and is riding a three-fight winning-streak.

The 36 year old feels that it is his duty to test the mettle of the undefeated prospect and to educate him in their bantamweight battle,

“I don’t know anything about the skills of Taira but he needs an education so I plan to educate him. He said he wanted to fight with me, it was his idea, so here we are, I’m ready to go.” 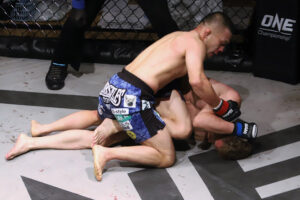 There is a gap in experience between the two fighters but Shimizu is not prepared to overlook any challenger. Still, he believes that his enormous number of fights and years in the fight game gives him a mental edge,

“If you train every day, the gap is small. Experience is required for this sport and for this level of competition. I have over 40 fights and through these experiences I have developed the courage to fight and to win.”

It’s been a testing year for athletes around the world and fighters have had to be patient and to train as safely and diligently as they can during these unprecedented times in order to be ready when they’re summoned to fight.

Shimizu is grateful just for being able to compete in this extraordinary year and expressed his gratitude for the constant support of his training team from the Tribe Tokyo MMA gym,

“I was able to fight and stop Takahiro Kohori (in May) and I had a no-gi match (in July) but I have to thank my team, my boss Mr. (Ryo) Chonan, my trainer Mr. (Toshiyuki) Horie and my teammates who’ve made sure that I’m ready whenever fights can be organised this year.” Shimizu is determined to not only win at Korakuen Hall but to make a statement that, at 36, this is the best version we’ve seen of the Tokyo-based standout. When it comes to predictions, Shimizu responds with conviction and clarity.

“It will be a KO on November 23rd” said Shimizu without hesitation.

Fans will be permitted to attend the latest installment of Shooto with a special set of Covid-19 restrictions at the venue on Monday, which is a public holiday in Japan. The ticket-selling headliner has a message for his fans,

“I am grateful to the fans who continue to support me even in this Covid-19 pandemic situation,” he said.

The fight was originally booked for Shooto 0329. Supposedly it was Shinya Aoki who suggested that the promotion match one of its up and coming stars with a seasoned veteran.

Shimizu is clearly motivated to defeat the younger fighter and put the first blemish on his perfect professional record,

“Nothing is more exciting than an old man defeating a young man. On November 23rd, I will fight on behalf of middle-aged fighters who are working hard all over the world.”