Every major sporting event in Japan has been compelled to cancel or postpone due to the coronavirus, or Covid-19, pandemic. But Shooto is going ahead with a fight card this Friday that will feature a mixture of MMA, Muay Thai and submission grappling.

The promotion is set to hold Road to ONE 2 behind closed doors. It will be headlined by a grappling match between BJJ black belts Shinya Aoki and Tomoshige Sera.

Aoki hopes that getting to see him compete will give people in Japan something to smile about,

â€œI want to see people smiling. It has been difficult for everyone around the world. Itâ€™s my way of making them happy and hopeful in spite of what weâ€™re all going through,â€ he said through a translator. 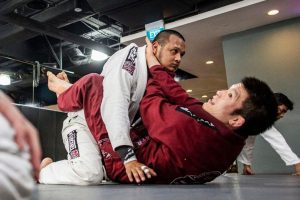 Aoki has already been playing his part. The former ONE Championship, Dream and Shooto champion has been volunteering as a bicycle rider for a local delivery company,

â€œIt was fun. I want to see everyone’s smile. Basically, I travel by bicycle in Tokyo so itâ€™s not new to me,â€ he shared.

Aoki may have one of the most decorated resumes in Asian MMA history but he is no stranger to submission grappling competitions. Under the ONE Championship banner he has faced both Garry Tonon and Marat Gafurov in these matches.

At ONE: ‘Dynasty of Heroes’ he was submitted by Tonon, who is now a top contender in the promotion’s featherweight division. But at ONE: ‘Kings of Courage’ he submitted Gafurov, a former featherweight champion who is now competing at lightweight.

He returns to the grappling mat to face Sera. His opponent isÂ a regular competitor in Kazushi Sakurabaâ€™s Quintet organization, where he represents Team Carpe Diem alongside Yukinari Tamura, Sotaro Yamada, Tomoyuki Hashimoto and Masahiro Iwasaki.

At Quintet Fight Night 4 this past November, Sera scored two wins for his squad, submitting Shutaro Debana with a kneebar in 27 seconds and then defeating Kazuhiro Suzuki with an armbar in 43 seconds.

Despite the change in rules and format Aoki will enter the 10 minute, submission only contest with the same mentality as he would for any fight,

â€œI go into my matches focused on winning. My approach is always the same. I grapple the same way, and I go for submissions the same way. It makes no difference to me in this match,â€ he stated.

The 36 year old lost his lightweight title to Christian Lee last year at ONE: ‘Enter the Dragon’. But he is coming off a quickfire submission win over former featherweight champion Honorio Banario at ONE: ‘Century’ Part II.

Aoki’s MMA career is on hold for as long as the coronavirus situation continues. But he is happy to be competing again and hopes to his grappling match will be a welcome distraction for an online audience starved of live action,

â€œI enjoy competing with the best, and this is going to be a great display of grappling. I hope fans of martial arts can forget their problems when they watch us.â€ 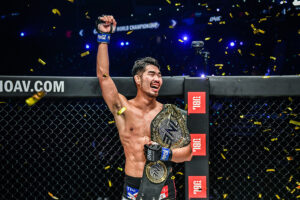