The 28 year old Surin native started out in the sport after his father took him to Pakonponsurin gym in Surin city and he had his first Muay Thai fight aged 12, losing on points,

“I wasn’t really sure when I had my first fight if I really wanted to do Muay Thai, I lost, but enjoyed the experience and wanted to fight more and get a win. I keep fighting up in Surin and around Isarn and after about four or five years started to fight in Bangkok,” he recalls.

Fighting under Petchyindee promotions, with the fight name Newlookrak Pakonponsurin, Knockout soon developed a solid reputation due to his heavy hands and one shot KO power.

He went on to win both the Thailand and Lumpini 108lbs titles, knocking out Ploywithaya Petchseemuan for the former and Tukatathong Por ThaiRungruangkhamai for the latter.

Knockout is now an undefeated champion in boxing, and has achieved far more international recognition than he would ever have done in Muay Thai. But winning the Lumpinee title is a moment that will remain with him forever, 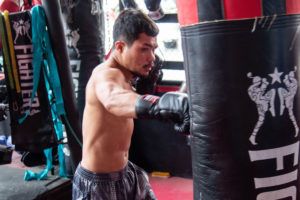 He idolized a fighter who was known for his aggressive and entertaining style.

“My favorite fighter when I was coming up was Pornsanae Sitmonchai, I tried to emulate his style always looking for a knockout. I can’t say who was my hardest opponent to fight, as they were all difficult, most of the fighters I lost against were more technical and with better timing. My most painful fight was against Wanchai Kiatmoo9, I beat him, but he broke my nose with an elbow.”

Petchyindee is the biggest of the various teams that cross promote in both Muay Thai and international boxing. Having a knockout percentage that was estimated to be around the 40% mark in his Muay Thai career it was inevitable Knockout would get the chance to slip off his anklets, lace up his boxing boots and try out the sweet science.

He made his professional debut in June 2012, winning the WBC Youth title after beating Marzon Cabilla of the Philippines. Like most Muay Thai fighters it took him a little while to settle into the new style,

“I found the switch in training tough at first, but I am used to it now, but both styles of training are hard in their own ways. I won my first fight on points after an accidental clash of heads caused the fight to be stopped due to a cut. It felt very difficult at first, especially getting used to the footwork. I didn’t feel really comfortable until my ninth fight where I won the WBA interim title.” 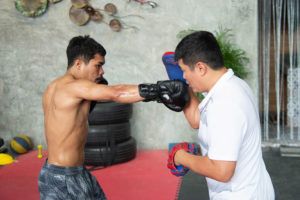 It was a while before Knockout ventured outside of Thailand and he was handed a tough assignment in China,

“My toughest fight in my career so far would probably be the fight against Chaozhong Xiang in Qingdao, China, as it was my first fight outside Thailand and my WBA title was on the line so I felt a lot more pressure than usual. My proudest moment in boxing would be winning the WBA title against Byron Rojas from Nicaragua.”

Knockout divides his time between training and fighting and his role serving in the Royal Thai Army, where he is a Lance Corporal based in his native Surin. When he has a fight to prepare for he travels down to the Sasakul Gym in Bangkok to work with former WBC World Champion Chatchai Sasakul and the Petchyindee stable of boxers.

He says combining the two careers is very straightforwards,

“It’s not too difficult for me as the army support my boxing career and it brings them recognition too, I just have to get a letter from the boxing organization stating I have an upcoming fight and I get permission to come to Bangkok to prepare. I also stay in good condition while I am back in the army base.” 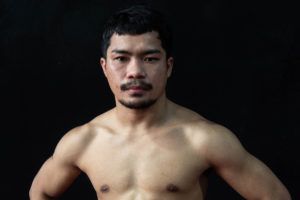 With a 19-0 record Knockout still feels he has plenty of time left in the sport and more goals to achieve,

“I will carry on fighting for as long as my body allows, I want to defend my title for as long as I can and I would love to get the chance to win some of the other titles at my weight.

Knockout has drawn comparison looks wise to boxing legend Manny Pacquiao, even earning the nickname ‘Little Pacquiao’, so it’s no surprise which international boxer he looks up to the most,

“My favorite international boxer is Manny Pacquiao, I have followed all his fights and love to study his style and try and fight like him.”

Pacquiao started out as a 105lber although the Filipino didn’t start to capture world titles until he had moved up to 112lbs. At the age of 28 it’s unlikely that Knockout will enjoy such a meteoric rise through the ranks in the higher divisions.

But he remains one of the best minimumweights on the planet and will be looking to go down in history alongside the likes of Floyd Mayweather and Wanheng Menayothin as one of the very few boxing world champions to retire undefeated.