Japanese prospect Koha Minowa has a chance to bring his dream to life on Sunday as he vies for the vacant Shooto strawweight championship against compatriot Yohei Komaki.

Minowa comes into the most important bout of his young professional career at Shooto 0126 riding a wave of confidence. He has won his last three bouts in convincing fashion.

The 20-year-old last stepped into the cage in May when he scored a third-round submission win over Team Lakayâ€™s Jared Almazan at Shooto 30th Anniversary Tour.

With that win Minowa solidified his status as a top contender in Shootoâ€™s talent-rich strawweight division. He sees Sunday’s title shot as a reward for four years of hard work on the promotion’s roster,

â€œIâ€™ve been waiting for this moment for a long, long time. Finally, I get to fight for the title. It feels like all of my hard work as a professional fighter has paid off. This is the culmination of the blood, sweat, and tears I shed in the gym. I am enjoying the moment,â€ Minowa said through his translator. 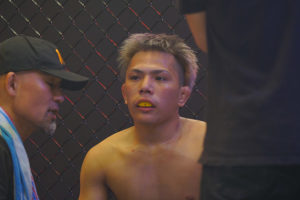 Winning the title this weekend means a lot to Minowa as he will stand shoulder-to-shoulder with legendary greats such as Caol Uno, Takanori Gomi, Anderson Silva, Shinya Aoki and Kyoji Horiguchi who all won Shooto titles.

â€œTo be included in the list of Shooto champions is such an achievement and honor for many fighters in Japan because a lot of great fighters started as champions in this organization and went on to be legends,â€ he stated.

â€œI look up to those men. Like them, I want to be great. The first step in the path is by getting the title on Sunday. I fought really hard to be here, and it feels incredible,â€ Minowa added.

While he savors the position where he is at right now, Minowa has his sights fixed on the task that he has to unravel in order to accomplish his goal. Komaki needs no introduction to Minowa. He has already beaten him twice, scoring stoppage wins in 2016 and 2018 although this is the first time a title will be on the line.

Despite drawing first blood, Minowa is not taking his rival lightly as he expects to have his hands full in the trilogy match against Komaki. His opponent is coming off a 40-second knockout of Tadaaki Yamamoto at Shooto 30th Anniversary Tour in June,

â€œI canâ€™t be overconfident against a guy like him. He is still dangerous, and I believe losing a fight is like a double-edged sword. It will either make you or break you. It turned out to be beneficial on his part. He won in his last fight. He learned from it,â€ Minowa explained.

â€œSo I am expecting a different Yohei Komaki on fight night,â€ Minowa continued. Minowa is confident he will be able to repeat the trick on Sunday,

â€œIâ€™ve been training hard for this fight. He is going to bring it, and I can sense that. I am prepared for the worst and dangerous situations. If he is hungry to win, so am I. That belt will bring me to places that Iâ€™ve never imagined,â€ he explained.

The Shooto strawweight belt has been in existence for over a decade and has only been held by seven fighters through the years. Former champions include Yoshitaka Naito and Yosuke Saruta and Minowa hopes to follow in their footsteps by becoming an international star,

â€œWinning the belt will do wonders for my career. I have so much to gain in this title fight. The big stage is waiting for me. Itâ€™s an opportunity of a lifetime. I am not settling for anything less than a victory this Sunday,â€ he declared.