At this stage of Koji Takeda’s career we know exactly what to expect from the 26 year old. He is an out and out wrestler who thinks he was guilty of trying to change his game in his most recent defeat.

Takeda was submitted by UFC and Bellator veteran Spike Carlyle at Rizin 35, a loss that snapped his four fight winning streak. It sounds like Takeda has some regrets and believes he did not fight to his full potential that night,

“My style is to be gritty and keep moving forwards no matter how bad it looks. I lost my last fight because I didn’t do that.”

Takeda is undefeated outside of Rizin but has lost three fights out of six for Japan’s leading MMA promotion. Things won’t be getting any easier for the Deep lightweight champion on Sunday when he faces another UFC veteran.

Takeda has been matched with Johnny Case at Rizin 37 and it sounds like he is a little intimidated by the American. But he promises not to make the same mistake he made against Carlyle,

“Of course I’m scared but running away won’t get me anywhere. I have to face my opponents that’s what defines me,” he said.

He believes that Case is a superior fighter to Carlyle but believes he has improved since losing by submission in April,

“Johnny is a very well rounded fighter at an extremely high level. I think he’s a better fighter than Spike Carlyle who I just lost to. But I get better per fight, and I get better while I fight so I have a good chance of beating him.”

Takeda has never lost two fights in a row and he believes there is a good reason for this,

“I have an iron will and endless stamina. I always learn from my mistakes and come back stronger.”

Takeda comes from a wrestling background and is not likely to win many ‘fight of the night’ awards. But his style has proved effective enough to earn him 13 wins of which three have come in Rizin fights.

He might not be expecting to lose but Takeda knows he is going to take a beating from Case. The 26 year old is ready for this and believes his stamina will allow him to finish the fight strongly and take the win,

“My mind is set. I am ready, I’ll probably become a bloody mess but that’s where I will find my chance to win.” 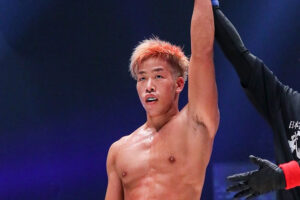