Koji Takeda produced a warrior’s display against Takasuke Kume at Rizin 27. The 25-year-old secured the unanimous decision in an all-action display as he extended his record to 12-1.

It was a big win for Takeda, his fourth in a row. Kume is a hardened veteran of Pancrase and ONE Championship and was riding a three-fight win streak of his own heading into the fight.

Takeda though, showed excellent striking and was able to drop his opponent with a stinging right hand. Looking back at the fight, he feels he could have done more but is pleased to have beaten such a formidable adversary,

“If we speak in terms of an MMA fight, I definitely should have mixed in more takedowns but my opponent was so well rounded and tough, it ended up being a stand up fight. I was able to edge out a win against a very tough opponent so that was a confidence boost for me,” he said. With 11 years age difference between Takeda and Kume, the younger man sees his victory, in many respects, as a changing of the guard.

“Kume was said to be the best Japanese Lightweight so I was able to beat him which means that I was able to successfully take the torch from him,” said Takeda.

The natural next step for the former Deep champion would surely be a showdown with Roberto De Souza. After his own impressive victory at Rizin 27, the Brazilian laid down the gauntlet, saying,

“I want to fight for the interim belt. Where’s Takeda?” Due to Covid-19, it is still difficult for foreign fighters to travel. Given that both De Souza and Takeda are based in Japan, the match-up should be fairly straight-forward to put together.

Despite all the signs pointing to an impending showdown, Takeda said,

“No, I have not heard anything yet,” but the Saitama-based fighter did compliment De Souza on his exceptional grappling, saying,

“He’s an absolute beast when the fight hits the ground.” Accordingly, Takeda has already got a game plan in mind should be pair finally come to blows.

“I wouldn’t go to the ground against him and keep the fight standing. He would probably want to utilize his striking to get the fight to the ground.”

With both fighters riding strong momentum and De Souza being one of the biggest names on the Rizin roster, Takeda believes a win would put him in place for a shot at the inaugural title.

“I think the storyline would lead myself of being a significant contender,” said Takeda. Takeda’s age profile means he’s heading towards the peak of his career and appears to be getting better with each performance. But, despite stacking up the wins in recent years, he certainly won’t be resting on his laurels.

“I’m not satisfied at all. I think it is just the beginning.”

Having only fought in Japan, it’s difficult to assess where Takeda would rank in terms of the best lightweights in the world, but he believes his recent form has propelled him forward on the world stage.

“The ocean is so big deep and there are so many tough guys out there. I wouldn’t be able to count myself in that. But if there is any ranking where I would be ranked, I think I did enough to climb a few steps up in that rankings,” he said. With former light heavyweight champion, Jiri Prochazka currently having a huge impact in the UFC, there’s certainly precedent for Rizin fighters making the jump to North America and enjoying success. Once he’s achieved his ambitions in his homeland, that move is certainly the ultimate goal for Takeda,

“I would like to fight in the UFC eventually. UFC was the reason why I started fighting so as long as I can participate in the world’s pinnacle, every fight would be a dream fight for me,” he said. 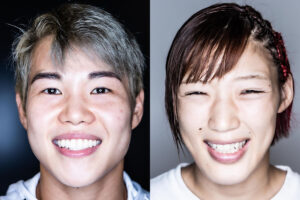