Koshi Matsumoto is coming off a big win at Pancrase 319 last Sunday. The Shooto lightweight champion scored the 21st victory of his career at the expense of Hiroto Uesako.

Despite getting the result he wanted Matsumoto admits things did not go entirely according to plan,

“It was completely different to how I expected. I thought I would definitely get a takedown and control the pace, not get hit. I was frustrated at the start (but) I just feel glad to get the win.”

It was his first fight in almost a year after two previous Pancrase bouts fell through. But Matsumoto says ring rust was not an issue,

“It’s been a year since I fought, but I felt relaxed as always. Because I’ve been trying new things and challenging myself, I was quite excited and looking forward to it.” 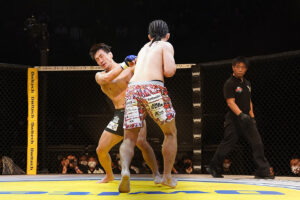 He feels the time off actually helped. After making a slow start Matsumoto says the lessons he learned while training this year served him well,

“At first I planned to stay away from his pace but he came flying in at the start and I got caught in the first contact. After that round what I thought about in training came back to me, I went out determined to take the second round and I was able to turn things around.”

He admits Uesako stunned him in those early exchanges,

“That first one got me but after that I was quite able to see his striking. After I ate that punch I thought I have to keep calm and made a point of not rushing things. So, I held back on my attacks and kept my work light. It worked and I kept my composure.” 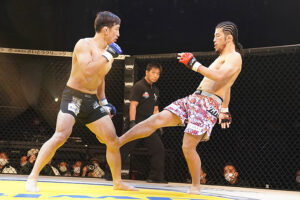 Matsumoto knows he won’t be competing at Pancrase 320. But he hopes to be back in action again early next year and says he wants to fight ‘as soon as possible’,

“There’s only one more Pancrase show this year in December so maybe at the beginning of spring. I’m going back to training immediately so if I have no injuries I want to fight soon.”

It was Matsumoto’s first ever Pancrase win. He has fought extensively for Shooto and also appeared on Rizin and ONE Championship events.

At the age of 37 he is approaching the twilight of his career but Matsumoto feels he can keep improving,

“As it goes with the martial arts, you don’t know until you get in there but today I was in my best condition ever, I felt great. It was a close win, but this win means I’ve been doing things right. I want to keep building and create a better version of myself.”