Kotetsu Boku determined to end his career on a high

Kotetsu Boku is a fascinating character. The 43 year old has been a professional mixed martial artist for almost two decades.

Nicknamed ‘No Face’ he has been a lightweight champion with both Shooto and ONE Championship. But Boku now finds himself in the sunset of his career, struggling to return to winning ways.

He dropped a unanimous decision to Jin Aoi at Rizin 23. It was his fourth straight loss and many speculated that the defeat would send Boku into retirement.

But the veteran is not ready to hang up his gloves just yet. Boku is booked to fight again this weekend at Rizin 25,

“I didn’t take too much damage and I was able to start training quite early and haven’t stopped since. I am a professional, so I learn a lot from every loss. The trust you lose in the ring can only be made up in the ring,” he explained. On Saturday Boku faces Rikuto Shirakawa in Osaka. He admits the poor run of recent form has been tough,

“I want to leave results so I can proudly say that it has been a fantastic experience. I’m in the process of climbing back up from hell to rebuild my confidence.”

Boku’s record currently stands at 26-15-2, while Shirakawa’s stands at 8-8-1. On paper, it appears to be a great opportunity for the veteran to turn his fortunes around.

There is a 14 year age gap between the two men and Boku admits they have little in common but thinks it will make for an entertaining contest,

“He’s the type of guy I don’t hang out with. Stylistically I think we match up very well. It should be fun.” There will be a live audience in attendance at the Osaka-Jo Hall this Saturday. The pandemic had caused havoc for fighters and promoters alike this year but Boku remains philosophical,

“In a world that changes so rapidly you never know what’s going to happen tomorrow so I plan to live every day to the fullest.” He said.

It’s no secret that MMA is one of the most physically demanding sports in the world. For a man approaching his mid-40s to have endured such a tough losing run it’s fair to question whether he still has the desire to compete.

It is a complicated question but Boku answers at length,

“I missed my opportunity to hate this sport and now I’m stuck at a point where I’ve fell way too deep into the quicksand of MMA. I think I’ve passed the point of love and I have been enlightened by the unforgiving gods of MMA.” 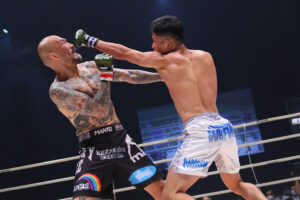 Having won two world titles in a career that’s garnered 14 victories via stoppage Boku must have many fond memories but refused to pick out a single moment that stands out,

His career has had its ups and downs. There have been more of the latter in the last three years but Boku still believes he can turn things around and give his story the perfect ending.

The 43 year old believes that if he can finish his career on a high the recent run of defeats will be quickly forgotten,

“A good ending to a bad movie makes it a good movie.”