Ren Hiramoto is now on a two fight winning streak after scoring the unanimous decision over Satoshi Yamasu at Rizin Landmark 4 in Nagoya. The former kickboxer transitioned to MMA in 2020 but struggled initially and lost his first two bouts.

The contest at Dolphins Arena got off to a lively start. Yamasu cracked Hiramoto with a massive kick to the lead leg but the K-1 veteran promptly dropped him with a right hand.

Hiramoto then got hit with a body kick but countered with a left cross. A three-punch combination left Yamasu on the canvas once more, but as he went in for some ground and pound the former kickboxer got caught in a heel hook. Hiramoto was able to work his way out and the action resumed on the feet where the kickboxer had a clear advantage. Yamasu was dropped for the third time in the round with a left hand doing the damage.

Having quickly found his range and rhythm Hiramoto appeared to be enjoying himself and he soon sat Yamasu down again as the former Deep featherweight champion another left had on his way in. Clearly second best in the striking exchanges the 32 year old started looking to wrestler.

Yamasu saw two takedowns stuffed in the second stanza and was dropped again as Hiramoto uncorked hooks from both sides before evading a knee bar when the fight went to the ground. The younger man just couldn’t find the finish and his opponent rallied in the third round. 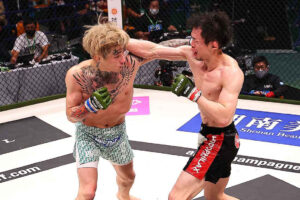 Yamasu sought to pick up the pace and landed some better shots, but soon found himself on the receiving end of a monster left hook. Hiramoto was putting on a striking masterclass and dropped his opponent with another left hook.

His one regret might be that he wasn’t able to finish the fight as he went onto to drop Yamasu one more time before the bell using the jab to set up the right hook. There was no question who the winner would be with all three judges awarding the fight to Hiramoto.

The win takes Hiramoto’s record to 2-2 and represents a huge leap in the evolution as an MMA fighter. Yamasu snaps his two-fight winning streak and slips to 13-7. 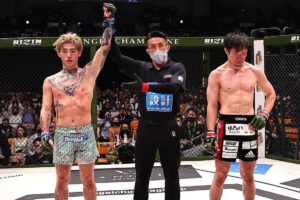 Masakazu Imanari (39-22-2) continued his slump in the co-main event. The 46 year old is now plying his trade as a featherweight but dropped a unanimous decision to Chihiro Suzuki (8-3 ) who is on a four-fight winning streak.

Yuki Motoya (32-10) got the better of Kazuma Kuramoto (10-3) in their bantamweight bout which went the distance. Kiyoshi Kuwabara (17-12) needed just over 90 seconds to finish fellow veteran Ikuhisa Minowa (65-45) in their heavyweight bout.