Kyle Aguon believes that becoming the featherweight King Of Pancrase will take him to the next level in his professional mixed martial arts career.

The 30-year-old is slated to challenge Isao Kobayashi for the silver-plated strap in the main event of Pancrase 309, which takes place in Tokyo on Sunday.

For the past 11 years he has been competing on the regional scene. In that time Aguon has transformed from a talented prospect from the island of Guam into a battle-hardened combatant who is longing to get international exposure.

“I believe I paid my dues as a fighter to break into the international scene. I thought my initial run in my first promotion would lead me to the UFC. But you know life has so many twists and turns that would make you doubt yourself at first,” he said. In addition, he had a short reign as the Guam-based promotion’s bantamweight champion before being overthrown by Kwak in January 2016.

When PXC ceased operations in 2017, Aguon offered his services to Pancrase. He climbed his way up the featherweight ranks of the Japanese organization, beating the likes of Suguru Nii, Hiroshige Tanaka and Taichi Nakajima.

On Sunday Aguon has an opportunity to move closer to his goal of strutting his wares on the global stage as a title victory over Kobayashi will earn him a ticket to ONE Championship.

The Singapore-headquartered outfit struck a talent-exchange deal with Pancrase earlier this year, allowing champions from the Japanese company to compete in ONE Championship.

“ONE Championship is rapidly growing all over Asia, and it is making its presence felt around the world. It’s an exciting time to be an athlete in this growing sport. As fighters, we have a lot options and opportunities,” Aguon stated. 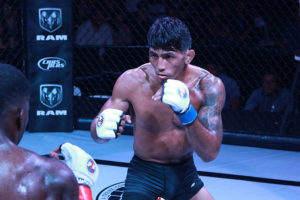 He sees Sunday as an opportunity not just to win a title, but to earn a contract with Asia’s biggest MMA organization,

“If I get an offer, surely I will get on board. I would like to go there and fight the best that they will put in front of me. Getting to the big leagues of MMA is the goal, and a win in my next fight will definitely put me in a much greater position,” he added.

Right now Aguon’s attention is entirely focused on Kobayashi, who he defeated by split decision two years ago,

“He (Kobayashi) is an all-round athlete. In striking, he can get the KO, and on the ground, he has good submission skills. Overall, he’s a high-level athlete,” he said of his opponent.

“He is solid in all areas of the game, and looking at his fights, he has good wins, especially in his last few matches.” 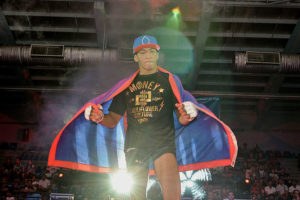 Kobayashi has turned things around since that disappointing defeat at the hands of Aguon. He is on a three-fight winning streak that included victories over Koyomi Matsushima and Nazareno Malegarie.

Kobayashi knocked Matsushima out with a solid knee shot in the first round of their April 2018 showdown for the interim featherweight belt and then toppled Malegarie in a title unification contest via unanimous decision at Pancrase 305.

Kobayashi might be resurgent but Aguon is not unduly concerned about his opponent’s improved form,

“I don’t have a special plan for him, only that I’ll focus on my own strengths. Even if it goes to the ground, I just have to be aware of my own movements. If he would like to strike with me, it’s fine. I can challenge him in every area,” he said.

For Aguon the upcoming encounter is a date with destiny. He wants to go on to bigger and better things and knows that Pancrase 309 is an opportunity to do just that,

“Deep in my heart, I know I deserve to be on the big stage of MMA. I feel it’s my fate to be there, and this weekend, I have the chance to do so. He is the champion, and he will have the hometown crowd behind him. It makes me want to prove myself even more. No one can deny me after this fight,” he said.