Kyoji Horiguchi believes he’s the best in the world

Kyoji Horiguchi has long been considered one of the best flyweight or bantamweight fighters on the planet, but now he truly believes he’s reached the status to be considered number one in the world.

Currently riding a ten fight win streak including victories in both the UFC and Rizin, Horiguchi hasn’t suffered a defeat since he fell to former flyweight champion Demetrious Johnson, who just recently lost his title to Henry Cejudo in August.

While rankings are always going to be a matter of debate, Horiguchi feels like the resume he’s put together over the past few years is enough to finally put him at the top.

“Of course, I am the number one in the world,” Horiguchi said while speaking from Florida where he’s training at American Top Team.

A one time thing

In his most recent outing, Horiguchi crossed over to kickboxing for a special showcase against highly touted striker Tenshin Nasukawa (who has been in the news this week) and while he came up short, the Japanese superstar was happy to see the sport get some much needed exposure on television.

“It was good for the Japanese MMA and martial arts industry to get back to prime time (on television), however, as a fighter, I want to win the fight. This was a one time thing (crossing over to kickboxing),” Horiguchi said. 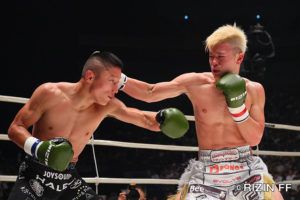 While Nasukawa is primarily a kickboxer, the 20-year old phenom holds a perfect 4-0 record in his mixed martial arts career where he also competes in Rizin.

As much as Horiguchi hated losing to him, he knows a second fight against Nasukawa under mixed martial arts rules would be a complete mismatch.

“No, he’s not my level in mixed martial arts,” Horiguchi stated.

As of now, there’s still no exact word on when Horiguchi will make his next appearance for Rizin, although he likes the idea of competing around New Year’s Eve, which is traditionally a massive time for combat sports in Japan.

Pride Fighting Championships routinely had one of their biggest cards of the year around the end of the year and the tradition has carried on with Dream and now Rizin as well.

Horiguchi isn’t in the business of calling anybody out but he hopes Rizin finds him a worthwhile opponent that will once again give him the chance to shine on the biggest stage possible in his native Japan.

“I want a fight where all the fans want to see my fight, whoever the opponent is,” Horiguchi said.

“When I started to fight for Rizin, the total audience was around 10,000 but this last fight was 27,000 in attendance. The numbers show the public is paying attention to us.”

MMA in Japan has been on a roller coaster ride for the past two decades but Rizin has started to make waves in recent years.

The expansion of the sport will continue with ONE Championship planning on coming to Japan in the near future and they’ve already started building a roster with local talent to perform close to home.

As much as Horiguchi would love the chance to avenge his prior loss to Johnson, he says right now there’s no interest in competing for ONE Championship because he’s happy where he’s at right now with Rizin.

“I try to talk to all the promoters all over the world but right now I want to focus on Rizin to help them to promote MMA and bring MMA back to the primetime,” Horiguchi stated.

Sources have said that Horiguchi could have his next fight booked any day now so stay tuned as he looks to return to action at least one more time before 2019 is over.