The fight came together rather quickly as Caldwell was awaiting a worthy challenger to emerge in Bellator and Horiguchi was doing much the same after running through virtually every contender available in Rizin.

Now the two top fighters will face off to crown the inaugural Rizin bantamweight champion.

“I’m happy to face the Bellator champion (Darrion) Caldwell,” Horiguchi said just after the fight was announced. “I have very good motivation for myself to face him and also this is a great test for myself to see how much I can do against those top fighters.”

“I’m very interested to face the champion of other promotions. I’m very excited to see the fight myself because I’m always looking to be the best fighter in the world and this is a good test. I’m very happy to have this fight.” 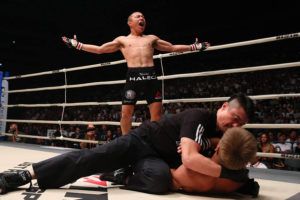 As dominant as Horiguchi has been in recent fights, he will go into his matchup against Caldwell with a decisive size advantage working against him.

Caldwell has competed at featherweight just recently and he’ll stand five inches taller than Horiguchi when the two step into the ring together. Perhaps the biggest advantage that Caldwell will hold over Horiguchi will be his dominant wrestling game as a former NCAA champion.

Horiguchi isn’t going to pretend like that’s not a major weapon for Caldwell and he’s already started to prepare for that factor in his training camp.

“He’s a top wrestler and has very good ground technique,” Horiguchi said. “Of course, my wrestling game has improved since I moved to (American Top Team) but it’s very difficult because he has long legs and long arms. I’m just going to make sure to have a very good game plan to face him.”

If Caldwell’s biggest advantage will come on the ground, Horiguchi believes he can be just as dangerous on the feet.

“My striking will be much better than his,” Horiguchi said.

The odds for the New Year’s Eve matchup haven’t been released yet but Horiguchi will likely walk into the ring as an underdog for the first time since he faced former UFC champion Demetrious Johnson back in 2015.

None of that matters to Horiguchi because he’s so confident in his ability to get the job done that he plans on beating Caldwell on December 31st and then hopes to face him in a rematch so he can claim the Bellator bantamweight title as well.

“After I win the fight, I want to go to Bellator in the U.S. and challenge the Bellator champion there,” Horiguchi said. “This one is for the Rizin title belt.” 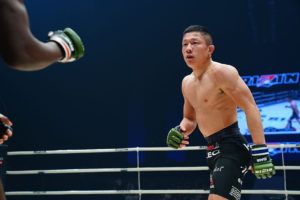 The magnitude of this fight isn’t lost on Horiguchi because it’s not often that mixed martial artists get to face champions from other promotions.

He’s going to appreciate every moment of this fight and Horiguchi hopes this will only present further opportunities for him in the future.

“This is what I’ve been fighting for in my career,” Horiguchi said. “So always I look for the biggest fights for myself and this is one of them.”