Kyrgyz fighters silenced the the crowd by cleaning house at Double G FC 3 last Saturday night in Seoul. The main event was supposed to be a showcase for Korean Zombie protege Hong Jun Young but it ended up as another victory for Azizbek Satybaldyev.

The South Korean would have been hoping to earn a spot on the UFC Busan card with an impressive performance here. But that ambition was completely thwarted by Satybaldyev who came in with a detailed game plan and executed it with precision.

Young connected with a few solid shots but Satybaldyev landed more frequently with counters off the back foot, cutting the South Korean above the eye at one stage. He also completed enough takedowns to ensure there was no chance of the judges awarding the decision to the hometown fighter.

All three judges gave the nod to Satybaldyev (16-7), extending his streak to six in a row. Hong (9-6), however, loses any momentum from the two wins he amassed and that UFC contract looks a distant prospect. The co-main event was a champion versus champion affair between TFC bantamweight champion Hwang Young Jin and Alash Pride FC 135-pound titleholder Bakhtyiar Toychubaev. Even though many expected a gritty back and forth battle, it was the right hand of the Kyrgyzstan native that stole the show.

After being knocked down three times in the first round, Hwang never recovered completely and was outstruck on almost every exchange for the remainder of the fight which led to a unanimous decision win for Toychubaev.

Toychubaev (13-4) has now won five in a row, with two of those victories happening on Korean soil. Meanwhile, Hwang (6-4) snaps his five-fight winning streak run. 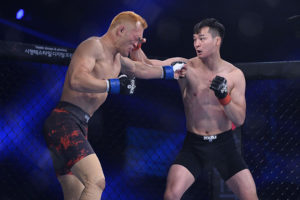 The return of Kim Han Seul was the most anticipated moment of the night. Ring rust was not an issue for Kim in that he was able to use his speed and accurate striking to starch Maeda Makoto in the first round with a left uppercut.

That makes it six in a row for the 29-year-old Kim, elevating his overall record to 10-3. Rumors have it that the UFC, as well as ONE Championship, are very interested in signing this up-and-coming welterweight.

Other notables on the night were URCC flyweight champion Seo Ji-Yeon (8-4) and French ground specialist Luc Rousseau (7-0) who both picked up first-round submission victories. the Korean choked out Arai Mika while the Frenchman was able to leglock Musa Conteh.