Highly touted featherweight Lee Do-Gyeom will make his promotional debut at Angel’s FC 10. He has been pitted against Japanese veteran Fumiya Sasaki as one of the marquee matchups for the January 28th event in Seoul.

After losing his URCC title to Mark Striegl under slightly controversial circumstances last September in Manila, Lee (5-2) looks to get a fresh start to the new year by competing in his home country for the first time as a professional.

Lee won the URCC featherweight title in 2016, pounding out Reydon Romero in the second round to become a champion. ‘Undead’ continued his successful run by defending the title multiple times and even earned a submission finish at lightweight before eventually getting choked unconscious by Striegl last year. 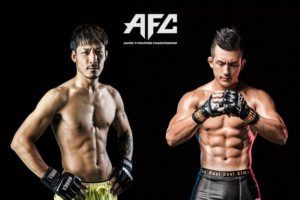 His opponent, Sasaki (10-16-2), is the former Grachan bantamweight champion and has competed for elite Japanese promotions such as Shooto and Pancrase throughout the last nine years. Even though ‘Kuwai D’ possesses a lopsided record, his slick submission game is nothing to sleep on and warrants some respect.

Just like Lee, Sasaki comes into this matchup on a sour note having lost three in a row. His last victory came during his only trip to Korea at Gleamon FC 1 in 2017, where he dismantled Yoon Da-Won via rear-naked choke.

AFC 10 will be headlined by welterweight champion Bae Myung-Ho with the identity of the challenger to be announced at a later date. Also on the card, Lee Sang-Soo will face off against Giacomo Lemos for the vacant openweight title in the co-main event.