Li Kai Wen has been very vocal about wanting to sign with the UFC. Those dreams were well and truly dashed tonight at ONE: ‘Winter Warriors’ Part II as he was stopped inside a round by Fabricio Andrade.

It was Wen’s first fight since 2019 and he was completely outmatched against the #4 ranked lightweight who barely broke a sweat in securing the first round finish:

"Wonder Boy" DEVASTATES Li Kai Wen with a FIRST-ROUND KNOCKOUT ???? Who's next?! @fabriciowdb #WeAreONE #ONEChampionship#ONEWinterWarriors2 | How To Watch: https://t.co/TP1EQ96v6z pic.twitter.com/P2kZyRnAcx

Andrade demonstrated why he is a blue chip prospect. He only made his ONE Championship debut last year but has already won three fights out of three for the promotion.

The Brazilian is based at Tiger Muay Thai and it was his striking skills which made the difference. Wen wilted in the face of a barrage of knees, kicks and punches with the referee mercifully stepping in to save him from further punishment at the 4:41 mark.

After two years away from the cage this is not the comeback Wen would have envisaged. But Andrade has the world at his feet and could be within touching distance of a bantamweight title shot. 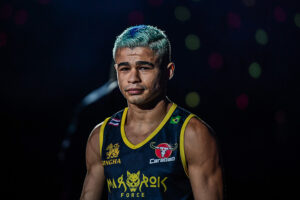