Lowen Tynanes addressed the media after the first loss of his career last night. The Hawaiian refused to criticize the judges who had awarded opponent Marat Gafurov a split decision win at ONE: ‘Collision Course’.

Two out of the three judges awarded the fight to Gafurov and Tynanes says they were just doing their job,

“That’s their job, that’s the profession and when you leave it in the hands of the judges you can’t do nothing.”

He was very impressed by his opponent’s grappling and thinks experience was a factor,

“The guy’s a phenomenal grappler, you’ve seen his record you’ve seen what he does to everyone. I felt pretty good when we got into the exchanges against the cage, I felt a little bit stronger but he had some tricks up his sleeve with some hand control and some nice cage control off his back. Little tricks here and there, that comes with experience.” 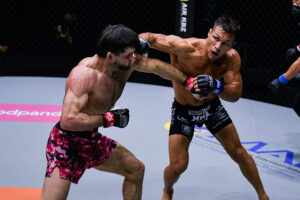 However the Hawaiian’s mood was overwhelmingly upbeat and he was just grateful to be competing again after losing several years of his career to illness and injury,

“This is my life, this is all I dream about, I’m obsessed and I’m just grateful to be able to compete again. With the ups and downs I’ve been going through personally I never thought I would fight again and I’m here today.”

Tynanes battles with a rare condition called spondyloarthritis have been well documented. He says he felt fine on fight night but was still experiencing issues just days before his bout with Gafurov,

“I had a little flare up the other day with the autoimmune disease I have, spondyloarthritis,  it reacts to the foods I eat so I had to be real specific when I ordered with grab and there were certain cases where they put in food that I cannot have. Maybe two days ago I had a little flare up on my chest but tonight my body was fresh, there were no symptoms. Everything felt great.”

Having to maintain a highly specific diet while quarantined in a hotel in Singapore must have been a struggle. But Tynanes wants to do it again as soon as possible,

Gafurov came on strong in the closing stages of the fight. He succeeded in taking Tynanes down, something which no previous opponent has ever done in a ONE Championship fight, and the Hawaiian thinks this might have cost him the fight,

He also admits to fading in the third round and says this could be down to ‘cage rust’,

“In the third I felt a little fatigued, I did feel a little rusty.”

It is very clear that Tynanes remains determined despite the maiden defeat. His comeback might not have got off to the best start but the 30 year old pledged to continue evolving and improving,

“It’s my first fight in a few years I gotta go back and look at the fight and see what I did wrong and continue to grow. If you’re not evolving with this sport you’re going to get left behind.”