Marat Gafurov wants a shot at Shinya Aoki next

At ONE: ‘Collision Course’ last night Marat Gafurov scored a split decision win over Lowen Tynanes. The Hawaiian was ranked #5 at lightweight so the Russian can expect to crack the top five for the first time.

Opponents in the upper echelons of the division are on his radar and speaking after the fight the former featherweight champion had one name on his mind,

“Whoever ONE Championship gives me I will fight. Of course I will look for someone ranked higher than me but my preferred fight is Shinya Aoki if ONE Championship want to organize that,” he said. 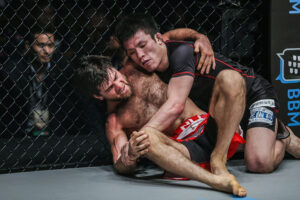 The two met before in a grappling match at ONE: ‘Kings of Courage’ back in 2018. Aoki scored a submission win on that occasion but Gafurov would like to fight the former lightweight champion under MMA rules.

The win over Tynanes held particular significance for the Russian because his deal with ONE Championship was about to expire and a second successive loss would have left him with an uncertain future,

“After my loss (to Iuri Lapicus) I had to win this fight because it was the last fight on my contract. So I had to make sure that i won this fight.”

He thinks this attitude enabled him to score a split decision win although Gafurov is the first to admit that the fight was too close to call,

“To be frank with you I thought it was a 50/50 match because first round I won, second round I lost and third round was a draw but we don’t judge (like that) so I’m happy I won.”

He was suffering from a back injury when he fought Lapicus earlier this year. Gafurov says he has been dealing with a few issues and admits he wasn’t at his best last night,

“Three months back I had an infection so I was recovering and it was a very hard period for me. I knew for a fact in this fight if I would wrestle with him my cardio would break after the first round so I didn’t wrestle. It wasn’t my best performance.” 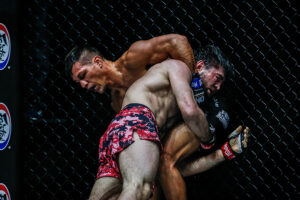 Gafurov had a very specific game plan coming into the fight and it played out in the way he anticipated,

“My plan was to try and control the first and second rounds and not let him wrestle and beat him on the counter and then last round my plan was ro wrestle with him and get him exhausted. Not everything went to plan but im happy I won.”

In the final moments of the fight Gafurov was able to control the action by pinning Tynanes to the ground or pressing him up against the cage. There was no escape for the Hawaiian and he says this is something he has always been good at,

“In my training camp I do that with the heavyweights, no-one can control (on the ground) better than me.”

A place in the lightweight top five awaits Gafurov. His career is back on track and a new contract will surely be on the table for the resurgent Russian.

Garry Tonon, Shinya Aoki to compete on May 20th