Nearly three years away from the cage didnâ€™t seem to slow down Lowen Tynanes in his return to action at ONE: ‘Hero’s Ascent’.

The undefeated Hawaiian ran roughshod over former ONE featherweight champion Honorio Banario in the opening round of the ONE Lightweight World Grand Prix with a stunning first round TKO.

Just seconds into the opening round, Tynanes displayed his high-level wrestling by planting Banario on the ground and the Team Lakay fighter never made it back to his feet again.

According to Tynanes, the fight played out even better than he had hoped.

â€œOur game plan was exactly what we did. I was very surprised it finished in the first. I could have gone another five rounds I was so pumped up. I had so much built up mentally and physically. At the end of the day, I felt very stoked with the way things played out.â€ While some athletes may have been looking for a warmup fight after sitting out since 2016, Tynanes wanted none of that when he finally made his return to ONE Championship.

He admits the back injury that kept him sidelined had him somewhat frightened stepping into the cage that night but he was never afraid of facing a top notch opponent like Banario on his first day back.

â€œIâ€™ve been training for maybe about a year and a half now with my back injury. Taking that next step and stepping into the ring was my biggest fear,â€ Tynanes explained.

â€œHawaiians scrap anybody. Hawaiians are not looking for anything easy. We never look for an easy fight. I feel like God built me for this. Honorio was a warrior. Iâ€™ve been a fan of his for a while now. When they gave me his name, I was kind of bummed but at the same time it had to happen so it is what it is.â€ 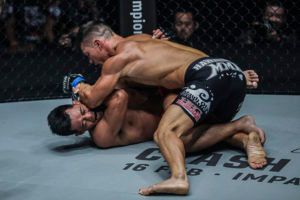 With a win under his belt, Tynanes now moves onto the semi finals of the Grand Prix tournament where he anxiously awaits the winner of the upcoming fight between former UFC and Bellator champion Eddie Alvarez and Timofey Nastyukhin, who meet on March 31st at ONE: ‘A New Era’ in Japan.

Even before this tournament started, Tynanes had targeted Alvarez as his dream opponent because he considers the 35 year old veteran a legend of the sport and thatâ€™s exactly the kind of opponent he wanted in this Grand Prix.

Admittedly, Tynanes was somewhat surprised ONE Championship put him on the same side of the bracket as Alvarez but that just means he has to play spoiler in the semi finals rather than the finals.

â€œI found out on the night of the fight that he was on the same side of the bracket as me,â€ Tynanes explained.

â€œI assumed they would have put him on the other side. Finding out he was on the same side, I was very surprised, but I have a better chance of fighting the legend now. This is amazing.â€ While Tynanes doesnâ€™t discount what Nastyukhin brings to the table, he feels Alvarez will just be too much for him.

â€œI donâ€™t know much about his camp and how they are doing things but I know Timofey is a very explosive striker. Every single strike he puts all of his power and I would say his weaker side would be on the ground.”

â€œI would expect Eddie to expose that. Iâ€™m definitely leaning on Eddieâ€™s side. I think heâ€™s going to be victorious.â€ Back in the gym

Tynanes wonâ€™t start preparing for a specific opponent until after Alvarez and Nastyukhin clash in March but heâ€™s already back in the gym just waiting for the chance to get back into the cage again.

If there was one negative aspect to this entire tournament for Tynanes, itâ€™s that he desperately wants to compete again now but may have to wait until the early part of summer to book his next fight.

â€œIâ€™m addicted to the gym. When something gets ripped from you, now I canâ€™t get enough of it. Iâ€™m the first one to the gym and Iâ€™m the last one out every night,â€ Tynanes said.

â€œIâ€™m bummed that they are fighting in March and I have to wait until after that fight. I wish it was earlier. I waited two years, Iâ€™d like to scrap next month.â€