Tonight Honorio Banario and Lowen Tynanes face off in the first quarter final of the ONE Lightweight Grand Prix. The winner will face off against either Eddie Alvarez or Timofey Nastyukhin in the next round with the full bracket released yesterday. 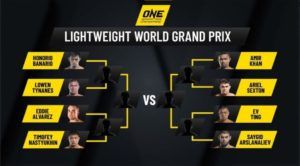 On the other side of the bracket are the four lightweights who face off at ONE: ‘Call to Greatness’ next month. Amir Khan is scheduled to meet Ariel Sexton while Ev Ting takes on Saygid Arslanaliev on February 22nd.

However the biggest draw in the tournament is clearly Alvarez. He will be a hot favourite to beat Nastyukhin at ONE: ‘A New Era’ in Tokyo on March 31st and the winner of that fight lies in wait for either Banario or Tynanes.

The hotly anticipated Grand Prix gets underway at ONE: ‘Hero’s Ascent’ tonight. Banario and Tynanes go head to head in the co-main event and the latter has been very vocal about wanting a shot at former UFC and Bellator champion Alvarez.

Banario is a former ONE featherweight champion who has resurrected his career in the lightweight division. Meanwhile Tynanes is undefeated but the Hawaiian hasn’t fought since 2016.