The outcome was exactly the same as the first fight with Gustavo stopping Yachi in the second round. The Brazilian seized the centre of the cage at the start of the fight with his opponent looking a bit wary.

Gustavo landed a hard kick to the body which was partially blocked. It was the Brazilian who was pushing forwards, looking to land hard right hands. Yachi countered with the occasional kick but was not offering much by way of of offence. 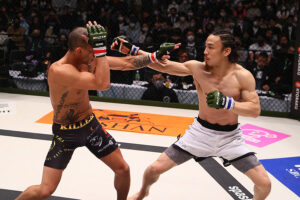 At the start of the second Gustavo threw a body kick and followed it up with a barrage of punches which dropped Yachi. The Japanese fighter was on his hands and knees clinging on to his opponent’s legs for dear life.

The Brazilian tried to find an angle to continue punching but Yachi was able to slow him down with a desperate takedown attempt. The Japanese fighter found himself on his back with Gustavo in half guard and took some more punishment. 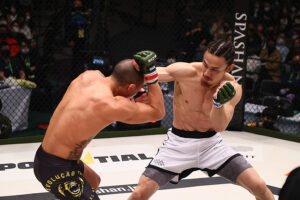 He did at least give himself some time to recover before eventually working his way back up as they separated. A lunging one two from Yachi stirred the crowd but there was almost nothing coming from the former Rizin lightweight title challenger.

Confidence was coursing through Gustavo’s veins and once again he followed a body kick up with a left hand, right hand combination which dropped Yachi. This time there was no recovering and the referee waved off the fight at the 3:14 mark.

With the win Gustavo improves to 11-2 and makes a successful comeback after two years away from the cage. Yachi drops to 23-13 and appears to be coming towards the end of the road.