Mansour Barnaoui is the new Road FC lightweight champion and a millionaire to boot.

Heading into the $1 Million Lightweight Tournament finale at Road FC 53, Mansour Barnaoui had crushed five straight to earn his shot at the title. On the other side, reigning champion Kwon A-Sol had sat out for almost two and a half years waiting for the completion of the tournament which might have been to the detriment of the organization’s golden boy.

The fight headlined Rod FC 52 on Jeju Island and Kwon came out with a very confusing game plan of rushing in and trying to fight Barnaoui in the clinch. He was looking to fight from close range against the taller fighter yet nothing came to fruition.

After some back and forth against the cage, the Frenchman reversed position and hit about a half dozen shoulder strikes to the jaw. 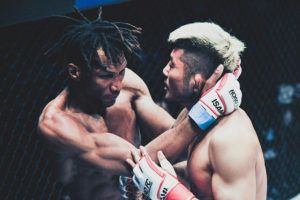 They spun off the cage but Barnaoui locked up a variation of the Muay Thai clinch and commenced to knee and land damaging punches. While Kwon was backpedaling, Barnaoui dropped the South Korean and the fight continued on the floor. The champion ate some more punches then was able the create some space but the French fighter was relentless and instantly got back on top.

While trying to scramble out against the fence, Kwon had his back taken and got himself into the most dangerous position he can be in. Leading into this championship bout, Barnaoui had choked out four out of five in the tourney and he would add the Korean to that list.

Kwon defended as long as he could but there was no shaking off the ground specialist. Once the arm was finally sunk into the neck region and the hips were fully outstretched, Kwon had the option to either tap or go to sleep. 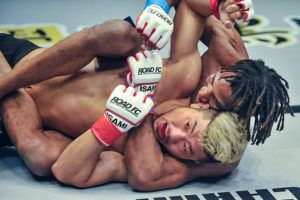 Mansour Barnaoui (19-4) now adds the Road FC lightweight championship to his M-1 and BAMMA titles. The 26-year-old has seven straight victories and solidifies his status as one of the best lightweight fighters in the world.

Kwon, on the other hand, drops to 21-11 and it will be hard to justify an immediate rematch with the type of performance he put on. The long layoff did not do him any favours, and many fans and pundits predicted exactly what would happen in the Road FC 53 main event. 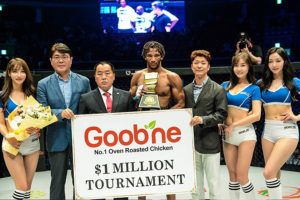 The co-headliner had late replacement Heo Jae-Hyeok step up on less than weeks notice just to get pummeled by the much larger and seasoned Aorigele.

Aorigele’s original opponent Jerome Le Banner was pulled from the event but fortunately for the promotion, it was an openweight bout and Heo was on standby.

Stepping in at a combined weight of 300kg, Aorigele and Heo shook the cage when they started to engage.

Aorigele pushed directly to his opponent from the jump to immediately start a brawl. His adversary obliged and start to swing heavy leather. With only winging punches and nothing significance landing, Heo clinched and tried for some dirty boxing.

While attempting to land some knees to the midsection, the Chinese fighter was hit in the cup and the action was halted. 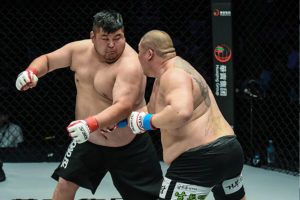 After a brief period to shake off the cobwebs, Aorigele signaled the fight to continue. He stepped forward and initiated a slugfest again but this time a right hook, straight left combination found a home and Heo fell sideways against the fence.

Aorigele rushed in and pounded a few more hammer fists until the ref stopped the fight. The 24-year-old Chinese heavyweight star extends his win streak to six in a row and elevates his record to 8-3. He has defeated Bob Sapp, Myung Hyun-Man and Kazuyuki Fujita along the way.

In the post-fight interview, Aorigele expressed interest in fighting Jerome Le Banner when he is able to return to competition.