After securing the third win of his MMA career at ONE 158 the overriding feeling for Marcus Almeida was one of relief. He saw two separate opponents pull out and ended up making an unexpected trip to Phuket when the fight was postponed for a second time.

He won with a first round stoppage and was just grateful that his opponent actually showed up,

“I’m so happy, so stoked that I got one more win, and I’m 3-0 right now. I have a lot of respect for Simon Carson. He gave me his word, he signed the contract, and he showed up on the day.”

He has managed to fight three times in nine months despite the postponements. ‘Buchecha’ is determined to stay busy and hopes to be back inside the ONE Championship cage as soon as possible,

“It was hard for me to find an opponent, but finally we found one, and I hope to get back as soon as possible. I want to keep on track and I want to keep the momentum going.”

He keeps getting offered fights by ONE Championship and hopes he won’t have to wait too long for the next one,

“I saw Demetrious Johnson vs. Adriano Moraes is coming up on August 26th so I’ll be down to be on that card, 100%. I hope I can get back to the cage as soon as possible, so this date would be perfect for me.”

With three wins to his name Almeida is arguably the #1 contender at heavyweight. The problem is that the division currently has two champion and he knows a title shot will have to go on the backburner until Anatoly Malykhin and Arjan Bhullar have had their unification fight,

“(They) have to do their business (to unify the belts first) but I’m working my way up. In the future I’m going to have more opportunities. But I’m not worried about fighting them right now.”

Both men were complimentary about ‘Buchecha’ in the buildup to this fight and the Brazilian says he was ‘honoured’ by the praise,

“For me to hear about these guys saying such good things about me, it’s a big honour because both of them are really big names in the sport. And it’s good to know that they’re watching the beginning of my career.”

Almeida is one of the most decorated submission specialists in heavyweight history. But in MMA terms he is a newcomer and the Brazilian admits he still has a lot to learn about the sport,

“It (my debut) wasn’t really long ago right? The first fight was in September, so it was less than a year from today. But one thing I can say is I’m feeling really confident in the cage. I’m learning the game, and every fighter becomes more comfortable. I’m not rushing anything. I’m taking my time to do everything.”

Having won hos first two fights but submission this time Almedia finished with ground and pound. He needed to take Carson down in order to do it but plans to finish more fights in this manner,

“That was my first TKO, but I hope not the last, that’s for sure.” 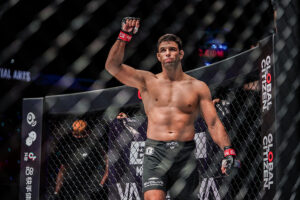