Marcus Almeida has had a hugely impressive start to life in mixed martial arts. The Brazilian has stormed his way to 3-0 with all his wins coming by way of first round stoppage.

As a a multiple-time jiu-jitsu world champion, it’s no surprise that the 32-year-old has finished all three of his opponents on the ground. At ONE on Prime Video 1  this Saturday he faces Kirill Grishenko and the Brazilian says he won’t be worried if he can’t get the fight to the floor,

“If I can’t take the fight to the ground, that’s no problem because I’m used to training with the best strikers. I’m feeling very comfortable in all aspects of the fight,” he said.

Grishenko comes from a wrestling background but ‘Buchecha’ is confident that he can stand toe-to-toe with the former heavyweight title challenger if he needs do,

“The training has been perfect. I’ll arrive very well prepared for the fight. Katel Kubis has been helping me (with Muay Thai) since the day I arrived at ATT. Boxing training I’m doing with Ivan Oliveira, who is a big name in Brazilian boxing.”

But Almeida has left no stone unturned and has also been working on his wrestling,

“Wrestling I’m practicing with Steve Mocco. I’m not afraid to fight wrestlers because I train with one of the biggest legends of wrestling in the United States. He gives me a lot of confidence, my wrestling has evolved a lot since I arrived at ATT.”

American Top Team is also home to current ONE Championship flyweight titlist Adriano Moraes. He defends his belt against Demetrious Johnson in the main event of this weekend’s card which is set to get underway on Saturday morning Singapore time.

He knows all about his opponent’s wrestling credentials but Almeida is motivated to take on an opponent from a totally different background,

“(He) comes from wrestling, I come from jiu-jitsu. I’m a fighter, I’m driven by challenges, and that’s something that motivates me.”

Almeida is also excited to be getting opponents from so many different stylistic backgrounds on his curriculum vitae. He thinks the time is right to test himself against a fighter with an impressive wrestling pedigree,

“I’ve faced a striker before. I fought another black belt, but he’s going to be the first wrestler, so it’s going to be an interesting fight. It’s a challenge I’ve been wanting. I wanted to face a guy who defends takedowns well to test me, so I think it will be pretty cool.” 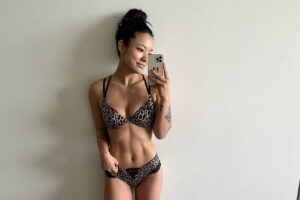