Mark Striegl is back in Manila and reunited with his family after his defeat at UFC Vegas 48. It is the first time in the Fil-Am featherweight’s career that he has suffered back to back defeats.

But Striegl sounds determined to bounce back stronger:

Striegl has had more ups than downs during the course of his 13 year career as a professional. He won his first 11 fights, becoming one of the most sought after properties in Asian MMA.

After coming short in a PXC title shot he signed for ONE Championship with high expectations but left the promotion with two wins from his three fights. Striegl signed for the URCC and went on to become the promotion’s featherweight champion.

He was rewarded with a UFC contract but so far results in the octagon haven’t gone his way. But Striegl says he will stand back up again after this fall.

There’s no quit in Mark! 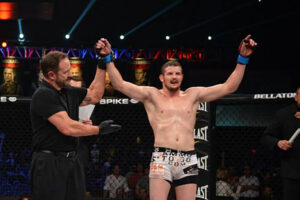