Mark Striegl was on the cusp of making his UFC debut when disaster struck. Four days before his fight with Timur Valiev the Fil-Am fighter discovered he had contracted Covid-19.

Striegl went from cutting weight ahead of UFC Vegas 7 to being told he had to quarantine immediately. The 32 year old says the news came completely out of the blue,

“I found out on Wednesday while I was checked in at the fighter hotel. I had no symptoms up to that point. I was a little tired but I just thought that was from the weight cut.”

Getting pulled from a card at such late notice would be a blow for any fighter. But Striegl had already traveled halfway around the world in the hope of being offered a UFC fight. 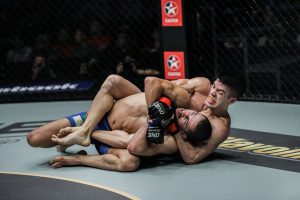 The reigning URCC featherweight champion had left his life in the Philippines behind in order to pursue his dream of making a UFC debut,

“I’m managed by  Ruby Sports and Entertainment and my coach George Castro. I was told that if I could get to Las Vegas from the Philippines that I would put myself in a great position and that there would be a high chance that I could get a UFC fight,” he said.

Although nothing was guaranteed Striegl decided that it was a gamble worth taking,

“I spoke with my wife and family first and the decision wasn’t difficult at all. The hard part was the travel and getting stuck in Manila. I had some flight complications and restrictions that came out of nowhere.” 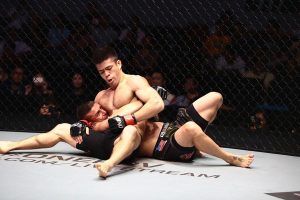 Financially missing out on the fight purse must have been a blow but Striegl is philosophical about the situation,

“I’m fine. In my mind it’s just a small setback and a bump in the road. All part of this crazy adventure.”

Having tested negative for Covid-19 he is out of quarantine and has just returned to training,

“I did start working out at home during the quarantine period once I started feeling better. Actually today was my first day back at Syndicate MMA training with everyone. My test came back negative and I no longer have any symptoms now so I’m free to train.”

In Striegl’s place stepped fellow PXC veteran Trevin Jones. He beat Timur Valiev, stopping the Russian in the second round to score an unexpected debut win.

Striegl, who had originally been booked to face Valiev, was impressed,

“I thought it was a great performance. It just shows how crazy our sport is and that it ain’t over ’til it’s really over.”

The Las Vegas cards are coming thick and fast. Striegl is currently calling the city home and expects to make a delayed UFC debut sooner or later,

“I just want to test myself against the best and compete at the highest level. The UFC has always been a goal of mine and getting covid definitely sucked but as I said, it’s just a small setback.”