Javid Basharat is one of two Afghan fighters on the UFC roster. He is set to make his second appearance inside the octagon this weekend and tips one of his compatriots to make it three mixed martial artists from the region.

His younger brother Farid Basharat is also fighting this week. He is set to compete on Dana White’s Contender Series. It is the exact same route that the older of the two siblings took to earn his UFC contract.

Basharat, who faces Tony Gravely at UFC Vegas 60, thinks his younger brother could go on to emulate his success,

“Over this last year, he’s closed the gap. Before it was a bit different, I was big brothering him a little bit, but now, he’s a handful,” he told UFC.com.

Basharat admits that his younger brother, who also competes at 135lbs, does some things better than him,

“He always tells me I’m his hardest round and stuff, but honestly, he’s one of my hardest rounds, too. There are some things that he does far better than me, and that’s how we’ve become so well-rounded is because I get to pick his good qualities, he gets to pick my good qualities, and this is how we evolve.”

The two brothers were both born in Paktia but they grew up in London and started training at the Shootfighters gym there. But Basharat has relocated to Las Vegas and says it has helped him take his MMA game to the next level,

“When I fought here on the Contender Series, I flew out early just to train, and I didn’t want to go back home, because it just felt like this was the place I needed to train at. Now I don’t have to think about ‘what do I need and where do I need to go?’ I just go to the gym and there are so many high-level coaches between Xtreme Couture and BKMMA, which is Dewey Cooper’s place. For me to be able to pick their brains and have them share their expertise and experience, it means a lot.”

His opponent has a black belt in taekwondo but potentially of more concern to Basharat is that Gravely wrestled at an NCAA Division 1 level. England is not known for his wrestling but Basharat says he might surprise a few people in Las Vegas this weekend,

“I know I’ve still got a lot of room to grow, but I don’t think I’m out of my depth by any means with Tony Gravely. I don’t feel like he’s better than me anywhere, including the wrestling; I really don’t. People underestimate my wrestling because they ain’t seen it, but they’ll be surprised with this fight.”

Basharat feels he has a point to prove this weekend and welcomes a different type of challenge,

Basharat earned his UFC contract by exacting revenge on Oron Kahlon at Dana White’s Contender Series. The Israeli had called him a terrorist after missing weight but was beaten up and taunted verbally before being submitted in the third round.

He got his career inside the octagon off to a good start with a decision win over Trevin Jones at UFC Vegas 50. But Basharat believes getting signed was just the start and he needs to work hard to keep holding his own in a very competitive division,

“It was a big accomplishment, but I didn’t sit down and dwell on it because I was just like, ‘I need to get to work!’ As far as I’m concerned, the bantamweight division is the best division in the UFC, and I’ll be silly if I sit back and rest for a bit.” 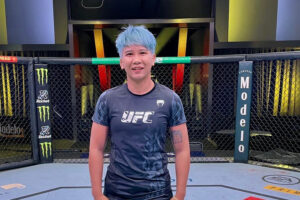