Mark Sangiao‘s youngest son appears to be following in the footsteps of his father and brother. He has been practising his kicking and appears to have found the perfect target.

Marko Sangiao has been using Kevin Belingon instead of a punching bag. ‘The Silencer’ shared the video on his Instagram account earlier today:

With his older brother, Jhanlo Sangiao, one of four Team Lakay fighters on the upcoming ONE: ‘Winter Warriors’ cards it is understandable that Marko is spending a lot of time in training camp. He seems to be learning some tricks from the fight team too.

Marko reportedly broke his ribs in a car accident last month, the whole Sangiao family was involved. If that’s the case he seems to have made a remarkably rapid recovery.

It might be a while before we see Marko in the ONE Championship cage but it will certainly be worth keeping an eye out for the youngest member of the Sangiao clan! 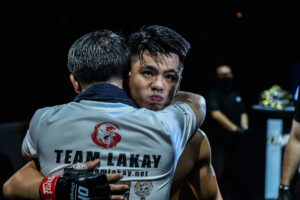