Masakazu Imanari wants to fight until he is 60

Masakazu Imanari has secured a special place in MMA history. He has well and truly earned the nickname ‘Ashikan Judan’ which translates as ‘the great master of leg submissions’.

Imanari is former professional wrestler and a veteran of ONE Championship, Pride, Dream, Deep and Pancrase. But it is his submissions, and in particular leg locks, that the 44 year old is most renowned.

Imanari is currently riding a two-fight winning streak in ONE Championship. He is a man of few words and had only this to say about those back to back victories, His remarkable career encompasses 20 years of elite competition and several titles, so it’s fair to say that his wins are born from a little more than just good fortune.

His approach to fighting has become a point of fascination for MMA fans around the world. His signature move is known as the ‘Imanari Roll’ and has been used by some of the biggest names in the sport.

The iconic ‘Imanari Roll,’ involves rolling from a stand-up position into a leg-lock and when executed to perfection can result a spectacular finish to a fight.

He describes the evolution of the technique as follows,

“I started doing it probably in the late 2000s,  I’m not sure how effective it is but I liked it. I am very happy to see so many people are using the technique. I’m proud and I see it now as a technique for the people.”

The move has the capacity to be something of a ‘Hail Mary’ for submission specialists who are looking to change the dynamics of a fight and can’t secure a traditional takedown.

A prime example was the recent UFC interim lightweight title fight between Tony Ferguson and Justin Gaethje. With the former losing the stand-up battle and needing something special in the fourth round, the advice from cornerman Eddie Bravo, another legendary grappler, was ‘do an Imanari roll’.

Unfortunately Gaethje was far too sharp to fall for the move, and the roll did little but to further drain his already-depleted gas-tank. But Imanari was watching that fight and is a big fan of ‘El Cucuy’,

“I love Tony Ferguson,” he said. Imanari’s own effectiveness at executing submissions is quite incredible. Of his 38 professional wins, 27 of them have been via submission and 17 of them have come via some kind of hold or crank on the opponent’s leg, foot or toe.

In the early days of ONE Championship he took out former bantamweight champion Kevin Belingon with a brilliant reverse heel hook in the first round.

Mike Brown, a former WEC champion and one of the world’ best MMA coaches, suffered a similar fate when he fell victim to a second round Imanari kneebar in 2005. 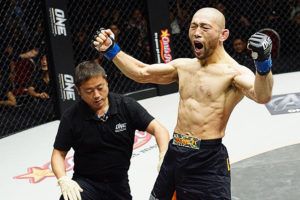 Imanari has held titles in different divisions with Deep and Cage Rage. To have achieved so many accolades in the sport takes tremendous strength of character, as well as unshakable self-belief.

Here, Imanari is not lacking, and describes the fighter he’s most excited by, as

“Myself at the peak of my potential.”

Given that his last fight was won with a heel hook, it’s fair to say that age has done little to dampen the deadly finishing skills and it’s his longevity that he feels is his greatest achievement.

“I’m proud to be able to continue to this day. I want to compete until I’m around 60.”

Imanari is not calling out anyone though. When considering his next match-up Japanese veteran has just one requirement, 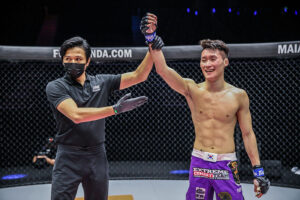