The top fighters never tire in their quests for new knowledge. Mei Yamaguchi might have made her pro debut back in 2007 but the 39 year old is still willing to travel to new countries in order to improve her MMA game.

She is currently in Thailand and has been training at Marrok Force MMA:

Yamaguchi shared a photo of herself alongside fellow ONE Championship strawweight Nat Wondergirl, up and coming flyweight Jack Ferguson and BJJ black belt DJ Jackson. The latter is a trainer at Marrok Force MMA while the other two both represent the gym.

Yamaguchi is primarily a grappler although she rocked Angela Lee with a few right hands in their two title fights. With Wondergirl coming from a Muay Thai background the two ONE Championship fighters should have had plenty of tips to share with each other.

She also appears to have spent some time with Dzhabar Askerov. He has fought twice for ONE Championship and also competed in the original Contender Asia series in 2007:

Yamaguchi has lost her last three MMA fights. But she was able to claim a very credible draw with touted BJJ black belt Danielle Kelly at ONE: ‘X’ in March.

She fought for the inaugural ONE Championship atomweight title back in 2016. Yamaguchi came up short against Lee in a very entertaining back and forth five rounder that could have gone either way.

While there was not too much controversy surrounding that decision the same could not be said of the rematch. Once again Lee was awarded the fight by all three judges but on this occasion many observers felt that Yamaguchi had done enough to win.

It meant that Yamaguchi narrowly missed out on the opportunity to call herself a ONE Championship title holder and go down in the annals of MMA history. But she has won six out of her 12 fights for the promotion and remains one of the fighters to beat in the atomweight division.

She missed out on a spot in the atomweight Grand Prix. But Jihin Radzuan beat Itsuki Hirata in a performance that there was plenty of quality among the fighters who weren’t invited to participate in that tournament.

Yamaguchi dropped a decision to Radzuan in her last MMA fight. But that was another controversial outcome and she doesn’t seem to have had too much luck with the judges during her ONE Championship career.

Yamaguchi celebrates her 40th birthday next year and is a seasoned veteran. But she is still willing to travel overseas in order to level up her MMA game and it will be interesting to see who the Japanese atomweight is matched with next.

Nat Wondergirl is training in Phuket 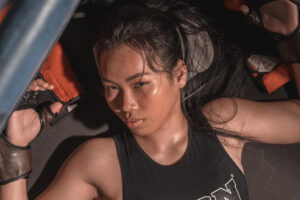