Michinori Tanaka has signed with LFA, decided to take grappling match as a tune up

UFC veteran Michinori Tanaka felt a sigh of relief when he found out that Shooto’s Road To ONE 2 event would push through this Friday even if it will be behind closed doors.

The 29-year-old is slated to square off with former Dream featherweight title contender Kazuyuki Miyata in a 10 minute, submission only grappling match. Tanaka has been craving competition since his last win which came at Pancrase 303 over a year ago.

He recently signed an exclusive contract with Legacy Fighting Alliance (LFA) but the U.S. based promotion is on hiatus due to the coronavirus pandemic. Tanaka was keen to participate in Road to ONE 2 and is grateful to the organizers for finding a way to keep the fight card intact,

“There were a lot of changes. They had to change the schedule and the venue. But I am happy that it’s finally happening this Friday. I think all people involved in this event went through a lot over the past couple of weeks. I guess I am not the only one happy here,” Tanaka said through a translator. The former PXC bantamweight champion admitted that training for his grappling contest against Miyata was a bit challenging due to precautionary and safety measures that he had to follow.

“It’s no secret that preparing for this match was difficult, but I was able to be in top shape and perfect condition. I am a professional, so it’s expected of me to do my duty as an athlete. I work hard every day in the gym,” he stated.

Standing opposite Tanaka across the ring is Miyata, a veteran who needs no introduction to MMA fans. He submitted Erson Yamamoto with a second-round hammerlock at Rizin 14 and has served as a member of Team Haleo in Kazushi Sakuraba’s Quintet organization.

Tanaka is excited to test his skills against Miyata but views the grappling match as a tune-up for his next cage assignment,

“It’s a grappling match, but I am a mixed martial artist. I can have a good experience by doing this. You could say this is a warm-up for my next fight,” he explained. Tanaka acknowledges Miyata’s strong attributes on the mat, but he warns his opponent about a few tricks up his sleeve.

“Miyata has a strong takedown, but I think I can handle it. I always like to attack from the bottom. I know I can be dangerous if he will allow me. I also know that I am strong. So let’s see how it will play out,” he said.

Tanaka still has his sights set on improving on an MMA record which currently stands at 13-3. He doesn’t have a background in submission grappling but is excited to be competing in an unfamiliar format,

“I am used to doing grappling with punches. I’m new to this kind of format, and I don’t know what it will be like or what it will look like. I wonder if there is anything that I will find fascinating. I will do what I can do.” 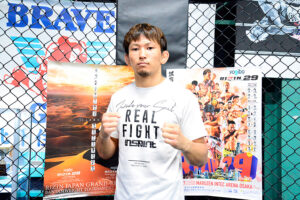