The full fight card for The Beast Championship 2 is  out. The event at the Sindorim Technomart in Seoul on September 10th will feature a featherweight fight pitting Min Hyuk Lee against Da Won Yoon.

Lee (6-2) is coming off a decision win over Jin Se Lee at The Beast Championship 1. In his previous fight he travelled to Singapore to face Ryoji Kudo, dropping a decision to the top ranked Shooto featherweight.

Woon (3-3-1) is coming off a decision loss to Jae Hyuk Bang at Double G 7. He had extensive amateur experience before turning pro in 2017 and has been competing regularly for six years.

Also on the card is a bantamweight bout pitting Sang Hyun Park (6-3) against Dong Gyu Kim (8-4). In the lightweight division Cho Jun Yong (2-8) has been matched with Byung Hee Lim (4-4)

As previously announced event will be headlined by an openweight fight pitting Myung Hwan Kim against Ik Tae Jin. The former  is coming off a decision win over Seung Jun Lee at TBC 1 while the latter has lost his last two. 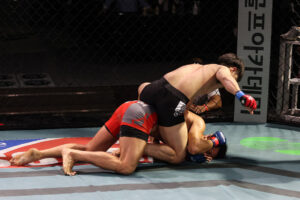