Former ONE Championship fighter and current commentator Mitch Chilson has a new belt. He received a promotion at Evolve MMA in Singapore today.

Chilson is now the proud owner of a purple belt in BJJ and he took to Instagram to share the news:

Most modern MMA fans know Chilson as the voice of ONE Championship, one half of the play by play team. But he fought on the promotion’s first ever card in 2011 and retired with a record of 4-2-0-1.

Chilson has also been training at Evolve MMA since the camp was founded in 2009 so he definitely has not taken any short cuts on his BJJ journey. While he is more commonly seen in a suit and tie these days the 43 year old loves nothing better than to throw on a gi and get some training in. 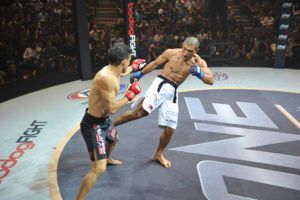