Eric Kelly was once considered among the most successful products of the MMA scene in the Philippines. But the 37 year old’s career has had downs as well as ups and he revealed this week that he is no longer part of the ONE Championship roster,

“I received my notice of release on June 19th. Admittedly, I was so sad when I got that email but in some way, I deserve it because I failed to do my part as an athlete. I am accepting ONE Championship’s decision to let me go,” Kelly said.

Kelly had been with ONE Championship since its first live event in September 2011 and has taken part in 13 matches under the promotion’s banner.

However he was handed his pink slip after losing seven bouts in a row, with six of them ending by finish. Kelly hasn’t won a fight since 2015 when he scored a decision win over Hiroshige Tanaka at ONE: ‘Tigers Of Asia’. Where did it all go wrong? Over the years Kelly has been embroiled in contract disputes with both the URCC and ONE Championship but he actually thinks receiving a $50,000 USD bonus for submitting Rob Lisita in 2014 set him on a downward spiral,

“I got addicted to the wrong habit (gambling). It was overwhelming, in my case. I didn’t know how to handle or manage the money I was getting. It did make me big headed,” he disclosed.

At that stage Kelly had money in the bank and an 11-1 record. His sole career loss had been caused by a pre-existing eye injury, and the Baguio native appeared to be on the top of the MMA world.

But behind the scenes things were spiraling out of control,

“It was really difficult. There was a lot going on in my life, my personal life, which hindered me from focusing 100% on training,” he recalls. The Filipino would go on to win another fight, beating Tanaka by decision to extend his winning streak to three. But since then he has lost seven in a row, a dreadful run of form which has effectively ended his ONE Championship career.

In the space of four years his record has fallen from a very impressive 12-1 to 12-8. Kelly has gone from being a top contender to becoming a featherweight journeyman and he says his financial issues played a big part,

“I needed the money so bad. I had no other choice. It was all about the money. At that time, all I cared about was how much I am getting. That’s it.”

After losing seven fights in a row Kelly admits his thoughts have turned to retirement,

“I’m not going to lie. I’ve thought of retiring even before I got my release papers from ONE Championship. Like they always say, the mind is willing but the flesh is weak. My body already tells me to stop,” he said. However he bears no ill will towards ONE Championship who signed him in 2011. Kelly accepts that he hadn’t done enough to retain his spot on the roster,

“MMA is a sport, but it is also a business. I completely understand that side of the sport. I just have to accept it and move on,” he said.

He feels the same way about the prospect of retirement,

“It’s a fact of life that I have to accept. I love fighting, but when your body tells you it’s over, you have to listen. Nothing is permanent in this life. Although I made some mistakes in my career, I absolutely have no regrets,” he said.

However Kelly is not ready to walk away from the sport just yet. He faces some of ONE Championship’s top featherweights during that seven fight losing stint and will probably be matched with slightly lower calibre opposition if he signs with a smaller promotion. At the start of his career Kelly did nothing but win. It’s a feeling he would like to experience again before his fighting days are done,

“I want to win again. That’s all I want. I can sign with any promotion to have a farewell fight. I can’t end my MMA stint with a series of losses. I can’t go in that way,” he said.

The Filipino knows that his days are numbered and thinks his next fight will be his last,

“I started my career with a win. I am going to end it with a win. Then it’s time to go,” he said. 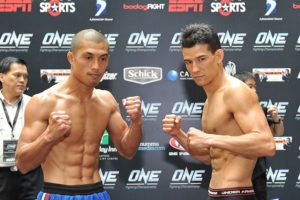 ONE FC: ‘Champion vs. Champion’ was the promotion’s inaugural show. Kelly was arguably the standout performer and he received a $5,000 USD bonus for choking Mitch Chilson unconscious.

ONE Championship is now firmly established as the biggest MMA promotion on the continent. Chilson has long since retired from fighting but remains a familiar face as one half of the commentary team.

Meanwhile Kelly somehow slipped through the cracks. Some bad life choice saw a promising career turn into a negative spiral which saw the Filipino continually losing fights and losing money.

He will still be fondly remembered by fans for the submission wins over Chilson and Lisita. Other standout achievements include stopping former UFC lightweight champion Jens Pulver in Manila and winning seven fights out of seven for URCC, becoming the promotion’s featherweight champion in the process.

There have been enough career highlights to more than compensate for the darker days. But Kelly craves one more and he hopes to finish on a high by winning his retirement fight, wherever and whenever that might be. 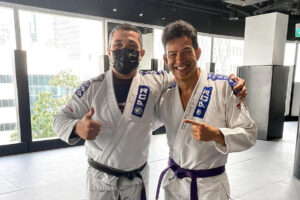