A few eyebrows were raised when Mizuki Inoue decided to accept a late notice flyweight fight from the UFC. The 25 year old would be required to move up in weight for a bout she barely had four weeks to prepare for.

The challenge for Inoue at UFC Shenzhen got that little bit greater when opponent Wu Yanan missed weight by 4lbs. However she never considered pulling out of the fight,

“I actually thought nothing about her missing the weight. I also missed the weight in the past and I don’t like to complain too much about it. My job is to put up a fight to entertain the fans and my mission was to win the fight. That’s all I was thinking.”

Inoue has had some well publicized struggles getting down to 115lbs. So she had some sympathy for her opponent and knew from experience the weight cut had probably depleted her,

“Although this fight was a short-notice offer I felt my first job as UFC fighter is to be fighting in the octagon so I wanted to enjoy this fight. Besides, when I saw Wu Yanan before the weigh-in, she didn’t look too energetic so I felt I can beat her.”

Having turned down a matchup at 125lbs in the past she had no hesitation in accepting a second offer to fight at flyweight,

“About a half year ago UFC did reach out to me about the fight and it was also at flyweight. I was surprised that they offered me a spot at flyweight but I was more happy that I got an offer again.”

She was up against one of the taller fighters in the division. But Inoue says that it is just part and parcel of being a flyweight,

She won by split decision. Given that she was fighting a Chinese fighter in mainland China the Invicta FC veteran must have known there were no guarantees where the scorecards were concerned. 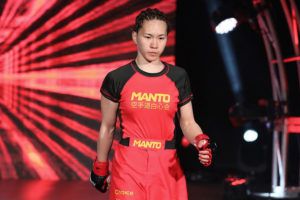 It meant for a nervous wait but Inoue believed she had done enough to win,

“I wasn’t too sure if I won that fight. But she didn’t land not many strikes on me and I felt I landed way more.”

However she doesn’t feel her long term future is in the flyweight division. Inoue is hoping that the next fight offer will be at 115lbs,

“I am a strawweight fighter so fighting at flyweight can be an option but I would like to fight at strawweight next.”

She has no doubts about her ability to make weight and Inoue says there is a reason she struggled in the past,

“Until I moved to New York, I never really cared about nutrition and all I did was just train long hours to lose weight. But since I moved to New York, I gained more muscles and I went through bit of difficulty adjusting my weight. For the next fight, I am going to sit down with my coaches to come up with a precise plan for making weight at strawweight.”

The UFC might not be putting on regular events in Japan anymore. But Inoue says that for fighters the promotion has definitely not lost its allure,

“I firmly believe UFC is the world’s best in MMA (and) I would like to prove my strength and ability in UFC. I know it’s very difficult to survive in UFC and I am not even sure if I can make it to ranking but I am having fun going through all these experiences and emotions.” 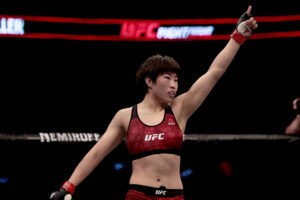