Weili Zhang wrote her name in history books as the first Chinese mixed martial artist to ever capture a UFC title, defeating Jessica Andrade in the main event UFC Fight Night 157 in Shenzhen.

The 30-year-old Hebei native pulled off the upset victory, trouncing the heavily-favored Brazilian champion in the very first round. Zhang only needed 42 seconds to dispose of Andrade, who initially got rocked by a right hand.

Sensing that her opponent was hurt, Zhang attacked with a barrage of knees. The Chinese fighter chased her down and unleashed a series of devastating strikes that caused the Brazilian to crumple to the canvas.

With Andrade receiving hard shots and throwing nothing back, referee Leon Roberts had seen enough and called a halt to the contest. The astonishing victory extended Zhang’s remarkable winning streak to 20 bouts and improved her record to 20-1.

Meanwhile, the defeat snapped Andrade’s four-fight victory streak. It also dropped her professional record to 20-7 and saw her lose the title she won earlier this year.

China’s Li Jingliang (17-5) brought the home audience to their feet in the co-headliner of UFC Fight Night 157, notching the biggest win of his UFC career yet at the expense of #14 ranked welterweight Elizeu Zaleski dos Santos (21-6) of Brazil.

Both men began trading powerful combinations right from the opening bell. Li staggered dos Santos in the closing sequences of the first round with a huge right hand and cracked him with a knee to the head.

Dos Santos came alive in the second round, making the bout slightly more competitive. However, Li regained the momentum in the following frame, drilling his foe with a crisp uppercut.

As dos Santos struggled to maintain his footing, Li completed the finish with a pair of thunderous uppercuts along the cage fence to earn the technical knockout victory at the 4:51 mark of the third round. 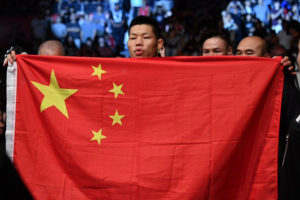 Both men engaged in a back-and-forth war of attrition from the very first round, tagging each other with powerful combinations. Although De La Rosa came in with a feral appetite for victory, Kara-France kept his composure and consistently mounted the pressure from start to finish. In the end, all three judges scored the bout in favor of the Kiwi. 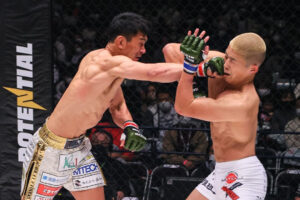