Mizuki Inoue will face Amanda Lemos on August 22nd according to Brazilian website Combate. The fight will take place on an as yet unnamed UFC Fight Night card with the venue yet to be confirmed.

At present this strawweight bout is the only fight on the card. The UFC has a series of events in Abu Dhabi coming up but this looks likely to be held at the promotion’s Apex Centre in Las Vegas.

Inoue (14-5) is based in New York. She is coming off a split decision win over Yanan Wu in a short notice flyweight fight at UFC Shenzhen.

The 25 year old will be dropping down to strawweight for this fight. She has competed in this division for virtually her entire career but has had issues making 115lbs in the past.

Leos (7-1-1) is coming off a submission win over Miranda Granger at UFC Busan. But travel between Brazil and the US has been suspended so it remains to be seen whether she will be able to get to Las Vegas. 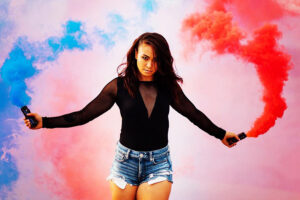 Half Thai hottie Michelle Waterson on injuries and ambitions