Moeri Suda and Aya Murakami rematched at Deep-Jewels 38 on Sunday and it was the former who emerged victorious. She claimed a unanimous decision win in the atomweight headliner at he New Pier Hall in Tokyo.

The two first fought at Deep-Jewels 30 with Murakami beating the teenager by decision. Both were making their professional debuts that day but came into this contest with much more experience.

Suda was coming into the fight on the back of a submission win over Mizuki Oshiro at Rizin 36. Prior to that she has been submitted by rising star Saori Oshima an atomweight title fight at Deep-Jewels 37. Having tapped out on that occasion the 18 year old showcased some grappling experience here to escape an early heel hook attempt from the shorter Murakami. Both fighters had submission attempts in the second stanza with Suda using her range to keep her opponent at bay with teeps and jabs.

Murakami clocked Suda with a left hook in the third. But she soon began to tire as the younger fighter got her down to the mat and rained down hammer fists and elbows.

Having shown a clear improvement from the pairs first meeting two years ago, Suda was delighted to get the nod from all threes judges to score the unanimous decision and extends her record to 7-3,

“Thank you all for your support. I lost to Murakami in my debut match. It’s very frustrating, but I’m happy to win after two years. From now on, my goal is to get revenge on Oshima’s atomweight belt once again. I think I’ll get revenge after losing and get stronger from there, so please give me another chance. ‘ she said. 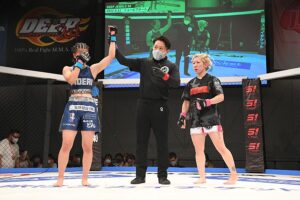 It took Namiko Kawabata (4-1) just 37 seconds to score the knockout victory against Yuko Kiryu (12-9) in their super atomweight co-headliner. She is undefeated since dropping down to 108lbs and made it back to back wins here. 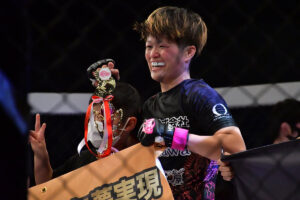