The Japanese title-challenger came out aggressively in the first round and commenced to blast solid kicks to the front leg that buckled Noh a few times.

Taking advantage of Noh’s slow start, Moriki found a home for the counter right unceasingly. Yet with about 30 seconds left, the South Korean connected with an overhand right that looked to have his opponent a little shaky.

Going into the second, Moriki continued with the same assertive game plan however Noh made the proper adjustments to swing the momentum in his favor.

Working the counters as the challenger came in was gold for the champion. On top of this strategic move, he was putting together combinations that found a home on the face of Moriki multiple times. Although Moriki beat up the legs and landed solid punches throughout the round, Noh was clearly the more active fighter. 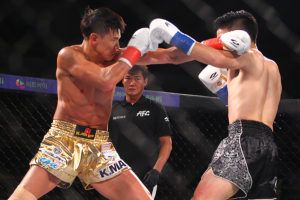 In the final round, Noh stepped up his output and did a better job timing the right hand when his opponent attempted leg kicks. With about a minute left, Miroki started to get desperate and tried for several spinning backfists to no avail.

Miroki (0-1) surprised with his grit and vigor but ultimately fell short on his professional debut.

During his 2018 campaign, Noh (4-0) captured the lightweight title and defended it twice without much resistance from the competition. The organization has made it clear that the champion will resume taking on foreigners until a formidable Korean contender materializes.

There have been rumblings of Noh possibly having his retirement fight in 2019 but only time will tell if that is just a rumor to draw interest.

In the featured MMA title fight, reigning featherweight king Moon Gi-Bum thwarted a late rally by Lee Min-Gu to get the unanimous sweep on the judge’s scorecards.

The action kicked off immediately with Moon pressing forward and inviting the standup exchanges. About thirty seconds in, Moon rocked Lee with a powerful overhand right. In spite of that, the Team Macho prospect stood his ground and recovered well. 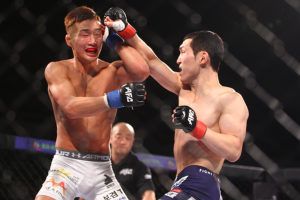 They got back to the centre of the cage and started throwing hard leather with both connecting sporadically. Although Moon was getting the better of the exchanges on the feet, he decided to clinch and work against the fence. Lee was able to get an inside leg trip takedown but nothing came of it.

The second and third rounds played out in almost identical fashion to the first. Both men winged combinations yet it was the defending champ Moon who connected with the more damaging shots. He also spent time unsuccessfully chasing takedowns which allowed him to knock valuable seconds off the clock.

Lee had his chance to steal the title at the end of the final round. With around 90 seconds left, the 28 year old shook Moon with a right hook then zoomed forward with a flying knee. Moon was stumbling around in survival mode while Lee hit him with another left hand and a straight right.

Moon was able to clinch up but Lee tossed him and dropped down ground and pound. In an error that probably cost him the fight, Lee grabbed onto a kimura instead of sustaining his effective hammering attack. The time ran out and Moon escaped by the skin of his teeth.

Moon (9-5) makes his second successful title defense while Lee (6-5-1) loses in his first shot at the AFC title.

In other action, Myung Hyun-Man crushed Jairo Kusunoki in 40 seconds in the co-main event which was reminiscent of their first meeting three years ago at Road FC 26. Myung has now won two straight kickboxing matches via knockout since retiring from MMA.

AFC did not announce any events for 2019 but the organization does plan on holding a show in another Asian country as well as growing the brand locally.