The 22-year-old caught the attention of the Las Vegas-headquartered organization in early 2017 after putting together a perfect professional record. He was 10-0 with six submission wins.

On his UFC debut Inoue beat former URCC flyweight champion CJ De Tomas by decision. A shoulder injury sidelined him for nearly a year but he returned to the octagon in 2018 and dropped a split decision to Matt Schnell.

Inoue was looking to bounce back after the first defeat of his professional career. But after just two UFC fights he was handed his walking papers, with the future of the promotion’s flyweight division up in the air.

Having only ever lost one fight for the promotion, and with that defeat coming by way of split decision, Inoue was understandably upset,

“I was unsure whether to believe it or not because my record in the UFC was not that bad. I believe I have two fights left. It was a sad day for me and my team. We worked hard to reach that level,” he said through his translator. 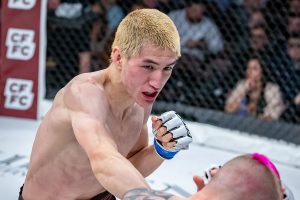 Inoue fights Trent Girdham at Rizin 21 this Saturday. It will be the fourth bout of his post UFC career and the decision to cut him from the roster still rankles,

“I think I have more to show as an athlete, but my tenure was cut short. The UFC is the sport’s biggest stage, and I had my opportunity. It’s sad, of course,” he shared.

The UFC was rumoured to be on the verge of scrapping the entire flyweight division after trading former champion Demetrious Johnson for Ben Askren. While 125lbs fights are still being promoted, the promotion doesn’t seem particularly enamoured with this weight class.

The fact that the flyweight division has not been scrapped only increased Inoue’s sense of confusion,

“That time was baffling, not just on my part but for everyone in the division. It is what it is. I had to accept my fate. I respect the UFC’s decision to let me go. As a fighter, my duty is to rebuild my career and move on,” Inoue added. 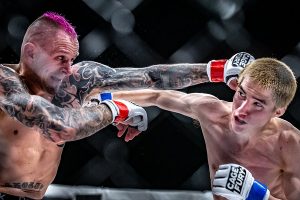 Since going 1-1 in the UFC Inoue has suffered a decision loss at the hands of Sean Santella at CFFC 72 and submitted Toshiaki Kitada at Deep 93 this past December, Inoue has the chance to prove his worth as a rising Japanese MMA star.

Next up for Inoue is Girdham. The Australian was submitted by Victor Henry at Rizin 18 last year but bounced back to score a stoppage win over Jayson Margallo at UAE Warriors 9.

Girdham’s record is almost identical to Inoue’s. Both have scored 12 wins in their respective careers although the former has been beaten three times, once more than the Japanese fighter.

For Inoue this represents a second chance. His UFC dreams might be dust but he can still resurrect his career competing in his homeland,

“I intend to make the most out of it. This is my second chance in building my own legacy. I will show everything I have. I am excited to be on this new journey. I hope everything will turn out great for me.”