Kai Asakura was able to overcome the odds by scoring a shocking upset victory over one of the best bantamweights on the planet today in a non-title bout.

Asakura amazingly made quick work of compatriot Kyoji Horiguchi in the main event of Rizin 18, which took place at the Dolphins Arena in Nagoya today.

Horiguchi, the Rizin and Bellator bantamweight titleholder, was stunned by Asakura with a leaping knee to the chin in the opening moments of the match.

Seeing Horiguchi on wobbly legs, Asakura swarmed on the champion as he started to swing a series of staggering punches and then hurt him once more with a second jumping knee to the jaw.

Asakura dropped Horiguchi with a right straight and then rained down a volley of punishing blows that compelled the referee to intervene and call a halt to the contest at 1:08 of the first round.

With his astounding performance against Horiguchi, Asakura improves his standing to 13-1 and is now riding high on a five-fight winning streak.

The victory also made a strong case for Asakura to challenge Horiguchi for the Rizin bantamweight title in a rematch later this year or in early 2020. 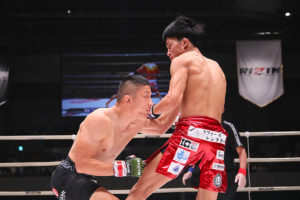 In the co-main event of the evening, Ayaka Hamasaki (19-2) extended her winning streak to five matches by making Thailand’s Suwanan Boonsorn (3-2) submit in the very first round.

Hailed as the No.1-ranked atomweight in the world today, Hamasaki had to squeeze herself through the eye of a needle to get her hand raised in triumph as Boonsorn put up a gallant effort to break the Japanese’s mystique of dominance in the division.

Hamasaki needed to fend off her foe’s suffocating advances on the mat, putting herself in danger as she left her back exposed.

A boisterous scramble on the ground enabled her to pull a limb for an armbar submission, which forced Boonsorn to wave the white flag. Kape finished the task at hand by rocking Mizugaki with a thunderous uppercut before quickly sidestepping in order to clobber a strong right straight to the jaw to lay him flat on his back.

In addition, UFC veteran Justin Scoggins (12-6) arrested his four-fight losing skid and picked up his first win under the Rizin banner. He defeated Japan’s Kazuma Sone (23-19) by way of unanimous decision.