The answer, we learned, was that his greatness shone through.

Inoue was bloodied and stunned over twelve rounds against Nonito Donaire Jr., but remained unbeaten, showing his grit and determination in a unanimous decision victory at the Saitama Super Arena in Japan.

The scores tell only part of the story. Inoue was cut in the second round over his right eye, the product of a Donaire left hook. By the middle rounds, Inoueâ€™s nose was bloodied, and a right hand shook him up in the ninth and put him a punch or two away from a knockout.

Inoue looked to have finished Donaire in the eleventh, when a right uppercut concealed Inoueâ€™s left hook just long enough to plant it into the midsection of Donaire, sending the Filipino American to a knee for a count of 9.9.

Donaire, in the twilight of a sure-fire Hall of Fame career at age 36, likewise showed great determination and courage to avoid going down a second time on his way to making it to the final bell.

After the twelfth roundâ€™s conclusion, the two warriors embraced at center ring, in a mutual show of respect between an aging legend and his now conquering mentee. 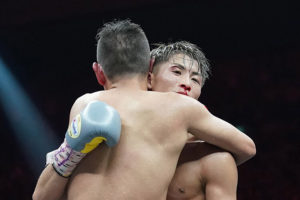 The Muhammad Ali trophy, which is handed to the winner of each WBSS tournament, was handed to Inoue by Fighting Harada, the former flyweight and bantamweight champion of the 1960s.

Harada is looked at by many as the greatest fighter ever from Japan, and the act seemed symbolic of a passing of the torch to the former junior flyweight, junior bantamweight and now bantamweight champion Inoue.

â€œWinning the Ali Trophy is the biggest thing so far in my career and I see a bright future in front of me. I am not the greatest of all time yet, but that is the goal,â€ said Inoue.

â€œDonaire was a very, very strong opponentâ€¦ This is the first cut I have had in my career. I think Donaire is a true champion.â€ 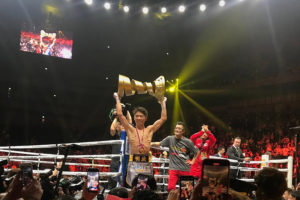 While the loss may be the end of a brilliant career for Donaire, a former flyweight, bantamweight, junior featherweight and featherweight champion, itâ€™s just the beginning for Inoue.

Immediately afterwards, a press conference was held to announce that Inoue had signed a multi-year co-promotional deal with Top Rank, alongside Japanese based Ohashi Promotions.

â€œNaoya Inoue is a generational talent, the sort of fighter who comes around once a decade,â€ said Top Rank chairman Bob Arum. â€œHe is already a superstar in Japan, and he will be major star stateside in no time. You are looking at an all-time great who is entering the prime of what will be a historic career.â€

Inoue, who had appeared once in the United States, stopping Antonio Nieves after six rounds in 2017, is expected to return to the U.S. in early 2020, a Top Rank press release states.

Top Rank had guided the careers of several other Asian stars, including Manny Pacquiao and Donaire, plus Ryota Murata.

Intriguing matchups for the pound-for-pound candidate from Yokohama are Nordine Oubaali, the Frenchman who retained his WBC bantamweight title on the undercard by outpointing Naoyaâ€™s brother Takuma Inoue. And then thereâ€™s Zolani Tete, the WBO titleholder from South Africa who has a mandatory defense later this month against interim titleholder John Riel Casimero.