The passing of the torch has been completed from the Asian bantamweight star of the previous generation to the new 118lbs kingpin of this generation.

Naoya Inoue left no doubt in his second meeting with Nonito Donaire Jr., dropping Donaire once in the first round before finishing him at 1:24 of the second round on Tuesday at the Super Arena in Saitama, Japan. With the win, Inoue unifies his WBA and IBF 118-pound world titles with the WBC belt that Donaire had won last year with a four round destruction of Nordine Oubaali.

Despite Inoue’s ten-year youth advantage and the victory he held in their first fight in 2019, the 39-year-old Donaire still remained the most dangerous challenge for Inoue. Donaire had shown in the past year that he wasn’t a spent force, knocking out the previously unbeaten Oubaali, then knocking out mandatory challenger Reymart Gaballo in four rounds last December.

Donaire had also been the only fighter to dent the armor of Inoue, having broken his orbital bone and stunned him multiple times in a life-and-death struggle the last time they met. This time, there was far less “drama in Saitama,” and more of Inoue’s dominance as a pound-for-pound candidate.

Donaire came out strong in the opening moments of the fight, landing a quick left hook on Inoue. Inoue began to open up in the final minute of the round, beating Donaire to the punch in combination and backing up the Filipino-American future Hall of Famer.

Donaire never saw the punch that put him down in round one, a short right hand that beat Donaire to the punch as he threw his own. Donaire beat the count and was saved by the bell to end the first, buying him time to recuperate.

“In the first round I received a left hook from Nonito and that punch woke me up,” said Inoue (23-0, 20 knockouts) of Yokohama, Japan.

“The last right straight, I didn’t know it would be the one [to end the fight] but during the intermission I saw the video and knew this was gonna be the one.” 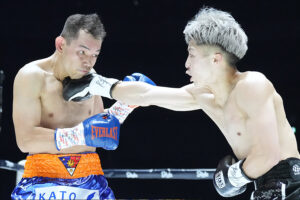 Donaire, known for having one of the most destructive left hooks in boxing history, was wobbled by a hook from Inoue early in the second round, causing his legs to betray him momentarily. Donaire never backed down, firing away heavy power shots in an attempt to turn the tide. A one-two follow-up sent a dazed Donaire (42-7, 28 KOs) into the corner, and a 1-2-3 combination put Donaire on his back again. He rose up shortly after, but referee Michael Griffin had seen enough.

Inoue cemented himself as one of the best fighters in the world, and a potential claimant to the pound for pound throne after Saul “Canelo” Alvarez was defeated last month by Dmitriy Bivol. Donaire, a four-division champion, could very well be headed off into retirement after suffering just the second knockout defeat of his 21-year pro career.

Looking to the future, Inoue set his sights on annexing the WBO title, which is currently held by British boxer Paul Butler. Butler was named the WBO bantamweight titleholder after the sanctioning body stripped John Riel Casimero for failing to meet the then-interim titleholder in two separate fight dates.

“My aim is to be undisputed champion. If I can do that within the year of 2022, I would love to stay in this division. If I can’t, I am capable of [going up in weight] to fight again in the next division,” said Inoue.

Nonito Donaire and Naoye Inoue to rematch in Tokyo