Nasrat Haqparast went the distance with former teammate John Makdessi at UFC Paris. The fight had been in the works for years but it was the Afghan who won it claiming a unanimous decision.

Haqparast decided to represent Morocco in this fight as he didn’t want to see the new flag of Afghanistan next to his name. He did manage to display the old black green and gold colours of the country on his mouthguard.

He explained the decision to represent Morocco saying the country had always supported him as a Muslim:

Perhaps the two men were a little too familiar with one another because the first round was basically a prolonged feeling out process. The crowd didn’t like it but Makdessi was marginally busier and scored with some low kicks.

The second stanza wasn’t producing much more in the way of action but a spinning back fist attempt from Makdessi left an opening which Haqparast capitalized on ruthlessly, dropping the Canadian with a right hook.

It was enough for the Afghan to win the round leaving the scorecards likely level heading into the third. Haqparast started to score with punches to the body and head and crucially landed a couple of takedowns in the closing stages.

To the judges we go! How'd you score that one? 🤔 #UFCParis pic.twitter.com/2scuvXRYvw

In the end all three judges scored the contest for Haqparast with the scorecards reading 30-37 (x 2) and 29-28. He improves to 14-5 and snaps his two fight losing skid while Makdessi drops to 18-8.

Afterwards Haqparasat made it clear that the well publicized animosity between him and Makdessi was over,

“We have a little history but I respect him. It didn’t get personal, everything is fine. I just love this, I’m a big UFC fan and I’m just happy to be in the UFC. I sacrificed a lot to be here.”

“Today, I showed a little bit of my real skill set.”@Nasrat_mma didn't feel pressure coming in on a 2-fight losing streak, but he was more than happy to put together a clinical performance and earn the win.

A heavyweight fight headlined the UFC’s inaugural event in Parus and Ciryl Gane (11-1) thrilled the crowd with a third round stoppage win over Tai Tuivasa (15-4). A barrage of kicks to the body and punches to the head finished the Australian and cemented the Frenchman’s status as the #1 contender in the division. 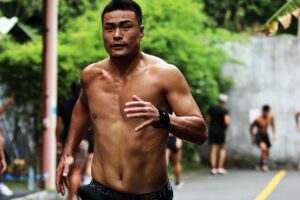